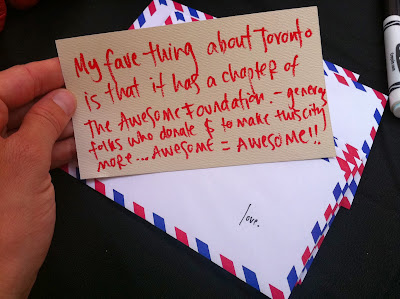 Maybe it's nothing more than my grouchiness getting an early start on the year, but I seem to recall reading or hearing about the mitigation of certain materials and usages and phenomena going into 2014.

One such thing - something that's been on the books for a number of years actually - is the use of the word "awesome." It was defined by Barb Sawyers in this article perfectly, as being (and I paraphrase) "monotonously ubiquitous."

In my opinion, it's one of those words which has not only been used to death, but used as a convenience such that it's lost its true meaning by those who use it to excess.

Iit's just more evidence of The Further Decline Of Western Civilization, one of my favorite topics. Or, mayhap Devo's concept of "de-evolution?" The idea that - 'instead of continuing to evolve - mankind has actually begun to regress as evidenced by the dysfunction and herd mentality of American society' ... ???

Additionally, my buddy Clark Brooks has summed it up quite nicely:

"I've placed a personal moratorium on the use of 'awesome' and 'amazing'. Lots of things are pretty good or even great. Very, very few actually inspire awe or amazement. Erupting volcanoes are awesome; the cupcakes someone brought into the company break room are not."