Now ... Karl did mention at one point his depth perception had been compromised from his injury.

But that didn't stop me from forgetting that fact.

We'd worked together for several days. He's a regular guy. The difference is he's simply got a single eye is all. But you wouldn't know otherwise.

Calling it a day one afternoon, we packed up our stuff and readied to head out. Karl came over the hump of the insanely steep driveway and called down to me below if I saw some copper fittings. I said I'd seen them.

"Mind tossing them up to me?" he asked.

I got all three of them and asked if he was ready to catch them.

Now, I used to play ball. Still do. Just not on a regular basis. And I'm a good aim. Winging the fittings to Karl wasn't any kind of challenge. At least ... not for me.

I flung the first one in for a strike ... which Karl promptly dropped directly in front of him. The next one whizzed in a bit to his right but he managed to get a hand on it. Still, he dropped it. The third? Another strike ... which he couldn't get purchase of and fell to his feet.

That's when I remembered his deficit. He was pretty much blind as a bat when it came to catching anything thrown at him.

We both laughed out loud.

Screw political correctness. It was a good moment ...

Posted by Ruprecht at 8:01 AM No comments: 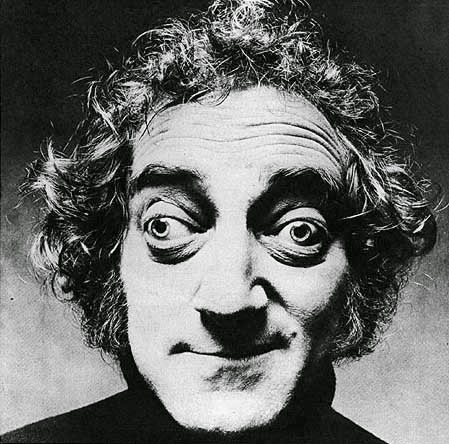 I hadn't been privy to the conversation taking place down below me until I happened on the guys who were having it. I caught wind of what they were saying as I came down from the roof.

The tale teller - Karl - continued: "Had I looked up a split second later, it wouldn't have stopped at the back of the socket bone. It would have gone right into my brain. I was lucky."

"Pretty much. I was on worker's comp for a few months. When it healed I could see out of the bottom half of the eye but the top half was grey and fuzzy. Couldn't see anything out of that part. I was told it was scar tissue that was making things fuzzy and I would need an operation. There was a good chance it would fix it but it might not. Long story short, it didn't work ..."

One of the other guys standing there listening in on the conversation started to shift where he stood, nervous. We knew what was coming.

Karl reached up to pluck out his left eye.

Out it popped. It was only a partial eye piece, not a full, rounded marble of an eyeball. He held it out for everyone to see (that was awkward, let me tell you) and you knew everyone groaned inwardly. Karl looked up good naturedly to show everyone what was left of the damaged eye. Scar tissue blocked the socket from going all the way to the back of the socket.

After everyone stared gape-mouthed at him for a moment he said "Now ... I need a little help positioning the thing when I put it back in. I don't always get it right and I don't have a mirror on me. Sometimes I look like that guy Marty Feldman ... you know ... from Young Frankenstein? So I'll need someone to tell me if I got it in right. Anyone willing to do that?"

Karl bent over and popped his eye back in, then looked up.

His right eye - the good one - looked right at us. The other one was pointed at a 45° angle straight at the ground. Several of the guys muffled chuckles. I directed him on which way to position the thing so it wasn't all cockamamie in its socket.

And then? We began packing up our gear as if nothing happened.

I was somewhat flustered as I rolled cords and straightened tidied stuff up; how was it possible no one knew that joke?

An All Together Different Matter 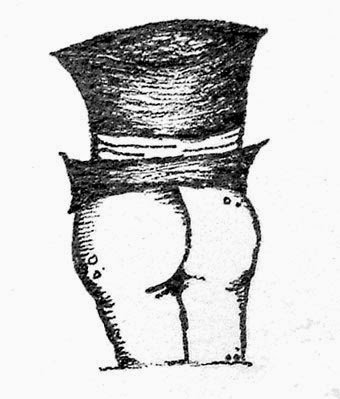 In the midst of conversation one day ...

"So what did you like better - the half day worth of mood or the mood that lasted several days?"

"That's not an option. You have to pick one."

"You don't think the half day one was better?"

"Wait ... are we talking about the moods being better or shorter?"

"... so you liked the shorter one better then."

"No. Again: There wasn't a 'better' mood. Now ... if you're talking about whether I liked the length of one mood over the other, that's an all together different matter ..." 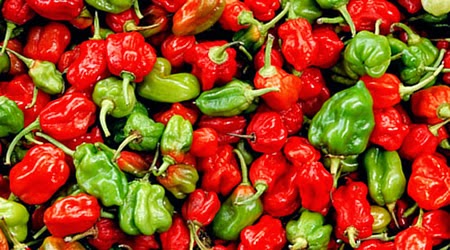 The first time I had heard about the Bhut Jolokia (Ghost Pepper) Chili I was in awe of the thing.

Rated as one of the hottest chili peppers known to man, the Ghost Pepper is a hybrid creation that stands behind only the Carolina Reaper and Trinidad Moruga Scorpion peppers who are numbers 1 and 2 on the list of the hottest on earth.

Translation: This little guy is nothing to fool with.

Regardless its #3 position, the Ghost Pepper Chili boasts an impressive 401.5 times heat rating over your everyday Tabasco sauce. Additionally, it tops more than 1 million Scoville heat units (SHUs). (The Scoville scale is the measurement of the pungency and heat of chili peppers and other spicy foods, rated as a function of capsaicin concentration).

I was first introduced to a story of this pepper via a story of an electrical worker who was on a lunch break. One of his buddies whipped out a container of home made salsa made with ghost chilis. The dude ate the entire container of salsa with chips (wisely, no one else would touch the stuff), then spent the next hour in the restroom.

When he emerged out of the lavatory, he went immediatel home.

And he didn't show up for the work the next day.

Or the day after that. 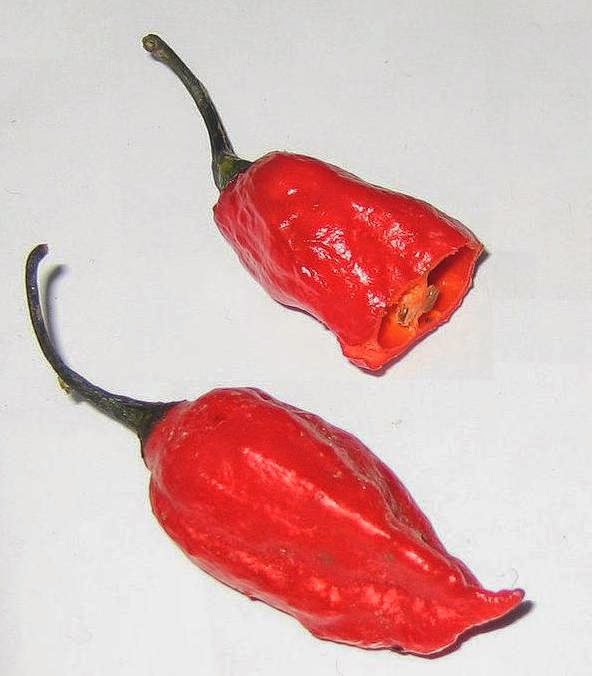 So at dinner one night, my cousin who knows of my proclivity for hot, spicy foods presented a small container of ghost chili salsa for my perusal.

Now, it's well known I'm daring. But I'm not stupid. I opened the container and took a whiff of the stuff. There wasn't any noticeable smell other than that of any normal salsa but, still, I wasn't taking any chances.

I ran to a cupboard and grabbed a couple Trisket crackers. Back at the table I picked up a fork and dipped one of its tines into the stuff and deposited a tiny dot of salsa on the end of one of the crackers. And when I say "dot" I mean the size of a pin head. I chomped curiously at the cracker.

Almost immediately, I was rewarded with a tasty salsa flavor, bold and rich. And then the most interesting thing took place in my mouth.

The only way to describe it is like this: Have you ever been driving along early in the morning and suddenly come upon a fog? The kind of fog that starts out as wisps of clouds and quickly becomes so concentrated they obscure your view completely, forcing you to slow your vehicle to a crawl while alternating your headlights from low beams to high beams and back again several times to see what lends the best visibility? That's exactly what took place in my mouth. A sensation of "fog" began rolling over my tongue and proceeded along to the back of my throat enveloping it throughout. It was strange, not unlike when you get a shot of Novocaine from the dentist.

And then? I felt a slow heat begin to rise, methodically and persistently building over the seconds to the point I realized my taste buds might be in trouble. The heat built and built, I felt a wash of perspiration break out on my forehead and an inkling of panic set in. Would the sensation stop? Or was I going to have to run for some milk to quash the oncoming heat?

Though, seriously, if a pinhead of ghost chili salsa was affecting me with such overwhelming resolve, what good would milk really do?

I felt myself beginning to salivate, similar to the initial stages of throwing up. I didn't have need of upchucking but I was experiencing the preceding salivations. If the heat kept marching onward I knew I was in for a searing ride.

But then? The sensation began receding all of a sudden. The heat buildup just stopped and backed off in stages. The foggy feeling in my mouth remained, I still felt myself salivating, the sweat was still on my brow but the fear of my mouth beginning to sear from the heat of the peppers was no longer a threat.

I ate my dinner that night with my sense of taste somewhat muted.

Since, I've used the chili on several occasions to spice foods ... but not to eat directly. That little bugger is way, way too potent and a little goes a long way. As an underlying ingredient to give foods a kick it's terrific. And that's all it's good for.

A year later, recently as a matter of fact, I revisited Bhut Jolokia. This time? In the form of ice cream.

It was being sold by a vendor, by both the spoonful and the cupful - $1.01 and $5.05 respectively. That same cousin was with me again and purchased a spoon of the stuff for me.

It was a warm day, ice cream was definitely on the menu. But Ghost Chili ice cream? Interesting concept. The sensation of the heat and the cold appealed to me. I had to give it a shot.

But, again, having experienced the pepper previously I wasn't going to be stupid about it. I started by licking off about an eighth of a spoon's worth of ice cream to catch my bearings. It was good stuff, cool and refreshing. Then, that sensation boldly came into play: The wash of mouth-fog, the revelation of approaching heat, the brow becoming damp. It really was an interesting experience and a different take on the ghost chili.

The down and dirty? I only got through a third of the spoon of the stuff. I wasn't going to jeopardize the rest of my day with the feeling of the roof of my mouth hanging in shreds.