In a recent news blip (I won't embarrass or disrespect real news folks who actually do reporting, thus I'm calling this a "news blip") LA Observed editors "convened a task force and asked the LA Observed map department to drop what it's doing and come up with an explainer graphic."

Here is the graphic they composed: 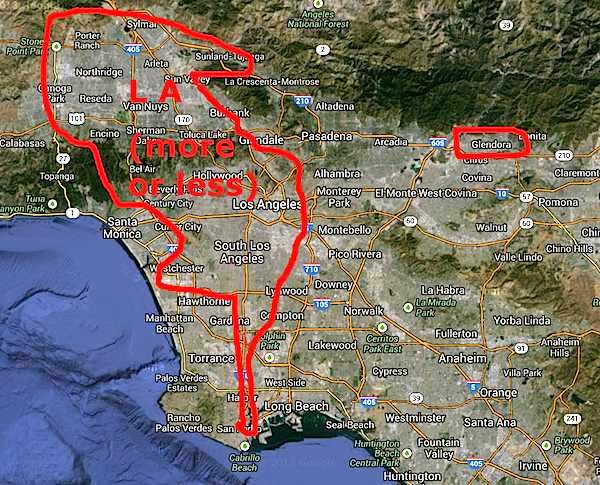 Bonus fun! Click on map to see if
the city of Glendora really is north of Los Angeles!
The real kicker for me is the copy "LA (more or less)" scrawled in red.

"More or less" ... ??? Ouch. Based on this, I'm surprised they even got Los Angeles proper inside the encompassed "more or less" area. But that's another matter entirely ...

Let's assume (and it is) north is at the top of the map, east to the right of the map. Given this information, here's my question to you, Mr. and Mrs. John and Jane Q. Public:

In the most general sense, where is the city of Glendora in relation to Los Angeles on this map?

Did you say "east" ... ??? If you did (and I expect 98% of you did in fact and indeed say "east") congratulations: I'm proud of you. Go dust off your high school diploma you proudly have hanging in your house somewhere.

Technically - and, again, in the most far-fetched and broad sense - Glendora is north of Los Angeles, but that's to say its position on the map is more "northerly" than that of Los Angeles. If you were giving directions to someone who was looking to head to Glendora from L.A. you certainly wouldn't tell them to simply "Go north."

If you're in Long Beach? Yes ... Glendora is definitely more north in direction than anything else. But, if you're in Sylmar, nope. So, here we have the difference between "Los Angeles" and "Los Angeles county" to deal with, something the "topographers" at LA Observed must have been intimating ... don't you think?

(Side Note: I'd hate to see what the department "dropped" in order to come up with the graphic. If it was a contract job I had commissioned them to put together and I saw the report I've linked, I would have withdrawn my request fast enough to make their heads swim ...)

No wonder US Americans need maps* ...