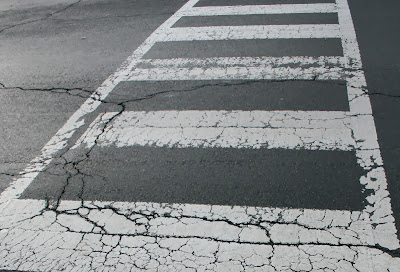 De-decorating can be difficult work.

I know ... I've been doing it for a lot of years. Too many to mention.

Over the last few days of de-decoration, my jeans and I have been tackling with rose bushes (we've both lost ... miserably), I've taken a rolling backward tumble I thought would result in my being impaled on an electrical outlet (didn't happen ... and, gratefully, I have wrestling training to thank for that) and my hands are their customary mid-January sore, cracked and peeling and crying for gads of moisturizer.

Tired from the long week, I was ready to turn in for the day when I got a text from my cousin: "Please bring back the 6' ladder." I responded I would.

The thing is I had walked to work that morning, the same as I had the last few mornings. So I had a choice: Drive the work van back to the house and deposit the ladder at home or walk it back through traffic, stoplights and more.

I opted for the latter.

Why? Why would anyone in their right mind walk a ladder a mile when they could easily drive it to its destination?

With four day's worth of glitter and dirt and grime on my jeans, a rosebush-torn hole in my knee, my portable coffee mug in hand, a long-sleeved shirt tucked beneath my arm, my camera (I'm rarely without my camera) and my tool pouch hanging from my shoulder and, now, a ladder in tow, I began trudging home.

It occurred to me suddenly I might look homeless. Because ... how many people do you see walking down a busy thoroughfare carrying a ladder?

I smiled. No one. No one I knew of at any rate.

I walked down the sidewalk a block or so and came to the light. I stopped, put the ladder down and hit the crosswalk button. When it turned green, I gathered all afresh and stepped into the crosswalk.

There were cars everywhere, at all four directions. The direction I was walking didn't have a left turn signal and I realized this just about too late ... because, all of a sudden, a Jeep Cherokee was coming my way unbeknownst to me. I was concentrating on all the other stopped traffic making certain it was safe to cross. I didn't see the Jeep coming out of nowhere, bearing down on me.

Obviously, the driver hadn't seen me either. Hard to imagine - the ladder I was carrying was a bright neon orange. I had to have been a sight to behold but the driver was oblivious to my presence. At the last moment, I heard the vehicle's approach and looked up. It was freakin' on top of me.

I was able to leap out of the way. I side-stepped deftly just as the driver looked up at me. He grimaced and stood on the brakes. There was a squeal of tires, I saw his wife (I assumed) practically smack her head on the windshield, the man shut his eyes in horror and the vehicle ended up stopped with me inches from the driver's door, me looking right at him.

He opened his eyes after a heartbeat and saw me staring at him through the window. I was fine. I mouthed if he was all right. He didn't understand, thinking I'd said something else. I pointed at him and mouthed again: "Are you all right?" He affirmed he was. I saluted him and walked on, hitching my ladder a little higher on my shoulder and getting out of the crosswalk.

He was still stunned. I'm sure his wife gave him an earful as he pulled out of the intersection and onto the main road.

My ladder and I kept on going.

That must have been a show ...