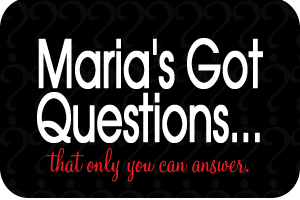 Fear And Parenting In Las Vegas asked me questions. In accordance with Maria's Got Questions monkey business fnp committed to, I'm doing same.

1. Why did you start your blog in the first place?

It was my way of getting in touch with the little latent creatures chock-full of creative tendencies lying within at the pit of my mind, begging to be released.

They’ve since not only helped to free themselves from stagnation, but have provided entertainment, valuable information and assistance to others as well. Go figger.

I beg your pardon. No such affinity – nor fantasy - exists. I believe you to be exaggerating a tad, fnp.

*yeesh* A guy can’t even make a girl’s day by proffering a pleasant comment without it being lavishly misconstrued …..

3. Given your recent papparazzi photography at the post office, tell us about your most notorious celebrity sighting/encounter?

This one is notorious in the sense it was performed whilst in the midst of hundreds of people. Said celebrity was monumentally embarrassed because of my antics:

Actor and star of Flash Gordon.

The film had been released in 1980 complete with a bevy of spiffy actors and actresses, a soundtrack by none other than Queen and (added bonus!) it was released on my birthday!

Sam Jones. Readying his booth for autograph seekers the world over.

Interestingly, I thought, was the fact his Flash Gordon poster in the background was falling down behind him. He had arisen to fix it his ownself. What a photographic opportunity, I thought!

As I tried to get a shot off, a figure kept looming into my view – a woman, I noted - ruining my fleeting opportunity to snap Sammy. I didn’t want to take my eye from the viewfinder lest the moment escape, but the chick kept getting in my line of sight.

I snarked at my buddy who was observing all and getting a kick out of the fact I would probably miss the shot I wanted. “Who the hell is in my way?!?” I grumbled. “Tell her to move off to the side so I can get this shot!” I commanded of him.

I could tell by his response he was starry-eyed about whoever it was, curtailing his effort to fulfill my wish: “But ….. it’s Erin Gray from Buck Rogers! I can’t tell her to do that!”

I know an opportunity when I see one. I dropped my camera, losing my sight and losing my shot, and yelled as loud as I could:

Everybody and his brother within a hundred feet turned to look at not only me but who I was yelling at. Completely embarrassed, Erin slunk away, red-faced, tail tucked ‘tween legs.

I was laughing so hard, I almost didn’t get my picture of Sammy. 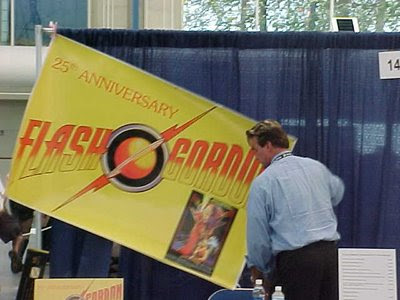 Being a Buck Rogers fan myself (not to mention an admirer of Erin Gray), I immediately went up to her, apologized and asked if she would forgive me my outburst. She was timid and wary of me, but loosened up when I asked if I could get a picture of the two of us together. We chatted and laughed for a good twenty minutes, talking acting and opportunities. 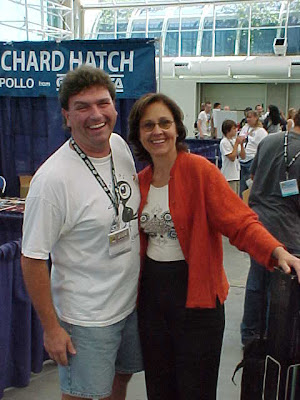 4. Now that the inauguration is nearly upon us, have you had any more interesting dreams about Barrack Obama or other poliitcos?

However, back to that particular dream about President-Elect Obama: It just might be a sign. Stay tuned …..

5. Since Soren's too much of a chicken to reveal his preferences, I'll ask you....boxers, briefs, or banana hammock?

Want to be part of it? Follow these instructions:

1. Leave me a comment saying, "Interview me."
2. I will respond by emailing you five questions. I get to pick the questions.
3. You will update your blog with the answers to the questions.
4. You will include this explanation and an offer to interview someone else in the same post.
5. When others comment asking to be interviewed, you will ask them five questions.