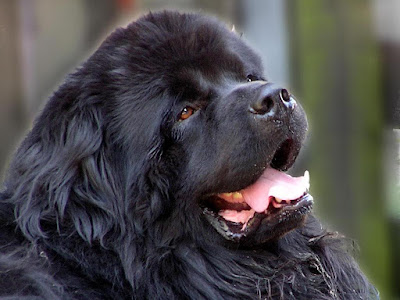 While at the vet yesterday, in came a monster of a  Newfoundland puppy. The owner and sat right next to me in an open seat and the dog plopped on the floor right near me. I swear he left a crater in the floor.

Understand I use the term "puppy" in the broadest sense in this case. The pooch, I discovered, was a mere 6 months old ... but topped out at 92 lbs. when he got on the scale.

He was a beautiful, alert and gentle animal that craved attention.

"Jeremiah Buttercup," she offered. "My granddaughter named him."

"Who indeed," she replied.

A little girl approached who had just come in with her mom and pet and reached hesitantly for the dog. "Careful" her mother scolded.

"Oh ... he's absolutely the gentlest with children ..." the owner offered.

"I'm more concerned with the dog," the mom explained tilting her head to her daughter. "She has a habit of slapping dogs in the head."

The owner of the Newfie scrunched her face a bit and looked at the girl.