Punk Does Not Sleep Induce 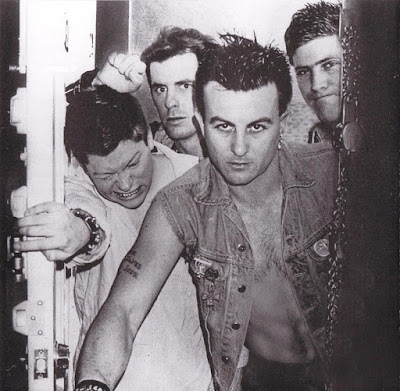 Coming home from work at the midnight hour, it's a rare occurrence when I can drop off to sleep right after walking through the door. I'm still wired and need to wind down.

Usually, I pop the television to life and catch my recorded "NBC Nightly News," just as I did early Friday morning.

With the news beneath my belt and still not quite ready to turn in, I scrolled through the channels to see if there was anything further to lull me to sleep. I found something, but it wasn't anything to whisper slumberly sweet nothings in my ear.

It was Penelope Spheeris' The Decline Of Western Civilization, the 1981 documentary detailing the Los Angeles punk scene. It had been some time since I'd seen it and I settled in for the next hour.

The kicker for me was hearing once more the band Fear fronted by caustic lead Lee Ving belting out "Beef Bologna," "I Don't Care About You" and "Let's Have a War."

I'd forgotten what a force Fear was to punk and at that specific time. And the performances they put on in Decline - complete with verbal attacks, sexist and homophobic slurs directed at the audience - were raw and powerful.

I went to bed humming "Let's Have a War." And it's been stuck in my head all the live long day.

So, for your dancing and dining pleasure, I present it here for auditory consideration. Please enjoy ...