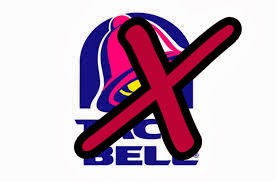 It was late in the afternoon on a sunny Southern California day. We had been running around all over the place on various errands. No breakfast had been eaten that morning and, all of a sudden, we realized we were famished. We needed to stop right then and there to get something to eat and the only thing visible was a Taco Bell. Not our favorite fast food place, but it was quick and easy and we weren't going to be particular about it at that very moment.

We got something. I remember having ordered some sort of super taco or some such. When our food arrived, we were like hyenas at a fresh kill - we tore at the wrappers to get at the food tucked within them and we scarfed that first bite as if we hadn't eaten in days.

Two bites in, I detected some sort of funk, something I felt just wasn't right with my food. I didn't immediately recognize what it was but something wasn't jake. I looked at my taco while working around a mouthful of food:

There, staring at me from the end of my last bite, was meat and cheese, just waiting for me to take another gobble. But it was the cheese that drew my attention: On a majority of the strands there was a fine, fine "fur" of the most delicate mold you could possibly imagine. It surrounded each strand almost completely and the mold itself had started to ever-so-slightly discolor. It was causing the bright orange of the cheddar to take on a dull hue. You could see the cheese beginning to go grey overall. It wasn't anywhere near there yet, but you could see it coming.

I immediately spit out my food, wiped all around my mouth with loads of napkins and downed copious amounts of beverage to wash out the unpleasantness.

I vowed right then and there never to eat at a Taco Bell ever again. Unbeknownst to me (and in retrospect) this was the start of my continuing harp (which I carry on about to this very day) about using the words "always" and "never" ... because that vow was a hollow one, an untrue one I would violate years later, despite the fact I had uttered it. Despite the fact I would tell the story time and again over the months which immediately followed "The Hairy Cheese Incident" (as I've "lovingly" referred to it over the years).

Fast forward three and half years or so: I was in Utah. The kids wanted to stop at a Taco Bell we were driving past. I involuntarily shuddered, but quickly reasoned that: 1) I hadn't been in one of the establishments for years; 2) that previous incident was an aberration which couldn't happen again, and 3) I simply needed to put on my big boy pants and suck it up no matter what my thoughts about the place were.

Now ... understand what I've stated above: It was the better part of 4 years since I last stepped foot in a Taco Bell and it was some 700 miles distant from the one I was about to step in this time. What could possibly go wrong?

Let it be known it wasn't a taco I had ordered this time around. It was something else entirely. Yes ... there was cheese in it, but it wasn't a taco, the very thing that could have sent me back to that terrible time all those years ago to relive the fear of that episode once again.

But it didn't make a difference ...

Food ordered and served, I unwrapped whatever my choice was. There, looking at me like a long, lost friend, was that familiar shredded cheese ... complete with a familiar fine fur of encroaching mold beginning to encase it. I felt my stomach lurch; I involuntarily swallowed, wrapped the concoction back up and pushed it away from me.

Seriously: What were the chances "The Hairy Cheese Incident" could possibly rear its ugly head once more?

But it did. And right then, I put my foot down and promised myself I would NEVER go into a Taco Bell again.

My name is Michael and I'm here to tell you I have kept that promise to myself. For the better better part of a decade I have not gone near a Taco Bell ...