In my dream, a friend and I went to a concert. We parked in a field with hundreds of other cars and I knew it would be difficult to not only find the car later after the concert, but it would be a madhouse getting out of the place once the concert was over.

In my dream, he walked from the car to the venue where the concert was being held and it took a long time to get there. I saw the venue finally and thought, at first, it was the Hollywood Bowl ..... but it wasn't. It was a smallish hole-in-the-wall arena with a curved stage and a single layer of seating, no balcony. But it must have held a good eight hundred people.

In my dream, the lights dimmed and the concert began. Classical music began to swell and the stage lights slowly came up to reveal an odd assortment of performers. More were wearing everyday clothes, shorts, T-shirts, jeans. Some had tuxedos on, some dressed casually. It was an interesting mish-mosh of performers.

In my dream, the arrangements for the music were played similar to that of Peter Schickele and I was pleasantly surprised. It was very enjoyable.

In my dream, the stage began to move backward. The floor was opening up in front of the performers and a pool slowly came into view. Right in the middle of an especially interesting arrangement, the lead percussionists began falling into the pool comically. I don't know why, but it made for a grand spectacle.


In my dream, William Shatner came on stage and grabbed a two of the cellists sitting off to one side and forced them into the pool with him. Water splashed liberally into the audience at those sitting closest to the front. That was their cue to begin jumping in the water. Several did.

In my dream, I saw many in the audience had had enough of this weird concert and they arose to leave. But more and more people decided they wanted to join the fray and leapt into the pool, doing cannonballs and dives. I looked and saw my friend getting wet and undecided of what to do. I tugged at his shirt sleeve, motioning him into the pool. He just looked at me as I dove in.

In my dream, the concert progressed still. I started singing while swimming in the pool. I recall not singing very well, but giving it a go nevertheless. 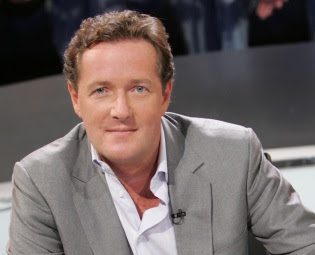 In my dream, Piers Morgan - judge on "America's Got Talent" and winner of "Celebrity Apprentice" - suddenly swam casually up to me and asked: "Were you singing?" I responded I was. "Don't," he suggested.

In my dream, everyone began exiting the pool. The concert was over. I was one of the last in the pool to get out. William Shatner swam by me. "What a great concert!" he offered, enthusiastically.

In my dream, we made our way to our seats where some of out outer clothing was laid out, drying. I couldn't find the long-sleeved shirt I was wearing. There were several similar shirts, but mine was not to be found. I overheard several people stating the same thing and they decided to just pick one of the pieces of clothing that looked like it would fit and went on their way. I did the same.

In my dream, the audience shuffled out the exits. I couldn't find my friend in the throng. I made my way backstage, but there was no one there but a few of the performers, still packing their gear. I decided to head back to the car.

In my dream, the walk back to the car was lonely. I walked to wear I thought the car was, but no one was there and no cars were present. The traffic had all disappeared and a vast, empty field was all that was left. The car wasn't there.

In my dream, I turned left and discovered a long brick wall with an archway opening. I walked toward the opening and when I got to it, I looked thorough it. It opened up into another field with a huge party of Mexicans playing softball and pitching horseshoes. In the distance were canopies where food was being served. I scouted to see if my friend was there, but he wasn't. I did, however, see a rather large, boisterous crowd beneath one of the canopies and decided to make my way over to it.

In my dream, as I approached the canopy with the biggest crowd, I noticed former president Jimmy Carter in line, holding a paper plate and plastic utensils, waiting to be served. I was thrilled to see him there, a white man in a line of Mexicans, just as hungry as the rest. He was speaking with the others in line and smiling. I wanted to meet him, but I didn't want to disturb him.

In my dream, I decided to leave the mass of people and continue looking for my friend and the car. I retraced my steps back to the brick wall. I went out the way I came in, through the archway, and I was in a long hallway made of brick. I proceeded down the hallway.

In my dream, I suddenly saw Jimmy Carter turn off the hallway into a room and I followed him. I took my a while to get to where he had turned, but I finally made it there. I was afraid I would miss him somehow. 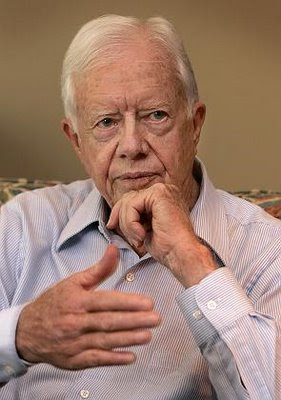 In my dream, I looked around the corner where Jimmy had turned and there he was, sitting on a couch comfortably. I went up to him and stuck my hand out, introducing myself. He gripped my hand warmly and told me it was pleasure to meet me. I explained I saw him in the crowd below in a line, but didn't want to disturb him, but now that he was alone, I thought I would say hello. I noticed my speech beginning to become more and more strained as I spoke with him and my words becoming sluggish and unintelligible, but I forced my sentences out as best I could. I told Jimmy of my concert that evening. He seemed pleased with this information. I switched subjects and thanked him for his service to our country and to people in need. My words slurred horribly and you could see Jimmy become more and more uncomfortable with each passing moment. I stopped talking, stood up, waved to him in realization that I knew he knew I was no longer understandable and took my leave of him.

In my dream, I knew that my friend hadn't abandoned me because that is not who he is. Something had obviously happened to the car and he was obviously locating transportation.

In my dream, I heard a loud honking. I turned to see it was my friend. He was driving a silver-colored, interestingly outfitted Jeep which was towing an open-air rail passenger car with wheels suitable for the terrain. Each and every seat in the car being towed was filled. He drove past and thumbed at me to get in. I noticed the Jeep he drove had multiple passenger cars hooked up to it, each one loaded to the brim with people. Eight cars passed before the line of vehicles finally came to a halt and I was able to find a seat on the ninth and final car.