"Gabriella" was a kick and a half. Never have I seen more spunk in a fish than in this one.

And in a goldfish at that.

And yes ... you read rightly: The fish was three years old. 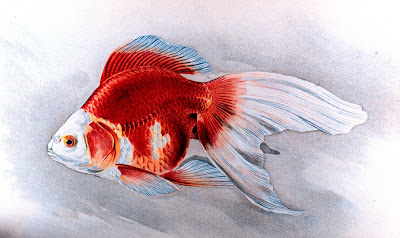 I think that I shall never again see
A goldfish live to the age of three,
My daughter's fish, Gabriella, she
Birthday'd thrice and much more, you see .....

That fish, she ate ..... and ate some more,
She must've ate 'til her sides were sore.
But that's okay, she gave us much more;
She gave us pleasure, smiles, stuff of lore.

The stuff of lore, you see, because
My daughter's fish, the fish she was
Was the biggest goldfish with fins of fuzz
And girth and hunger and all that was.

Gabriella the fish, never in a daze,
That fish was one who could surely graze.
She ate with gusto, with verve, for days,
Our astounding fish never failed to amaze.

She literally jumped from the water to feed,
She leapt, she twirled, to consume her need.
She entertained hugely, whether she fed or peed,
That fish was family ..... for certain ..... indeed.

So it was sad to see her begin to list,
Her final day would not be missed.
We would all be there, fate could not twist
Our last view of her and the tank she'd kissed.

And so, with solemnity, we say farewell
To our little three year-old fish we all thought swell.
With her gaping mouth that appeared to yell,
Our close family fish who we will miss, oh well.

So good bye, Gabriella ..... you've left a big hole
That will never be filled, not with shovel nor bowl.
Dear fish, you've given your ultimate toll.
You'll be missed, dear fish ..... swim now to your final shoal .....