I'm a member of several groups on Facebook for my personal edification and entertainment. One such group - Pre-Code Hollywood (1929-34): Sin on Celluloid - is a nifty little gathering of fans who concentrate and discuss filmmaking of 1929-34, a period featuring a more laid back atmosphere of film production.

Per film historian Thomas Doherty: "More unbridled, salacious, subversive, and just plain bizarre than what came afterwards, they look like Hollywood cinema but the moral terrain is so off-kilter they seem imported from a parallel universe." (If you're unfamiliar with pre-code film and what it's all about, you can learn tons here.)

Not only have I learned quite a bit about the era over the years, it's been a fun ride, giving me not only a new appreciation of films I've previously seen but ones I've never before been introduced to. Furthermore, I have been pleased and surprised at the depth of knowledge (not to mention the intelligence of the group's members), present company excepted, of course.

Well, Sir, late last evening a photo of Clara Bow was posted on the group site. It showed her seaside sitting atop a wooden pylon with what appears to be an open box in her lap. Here is that photo: 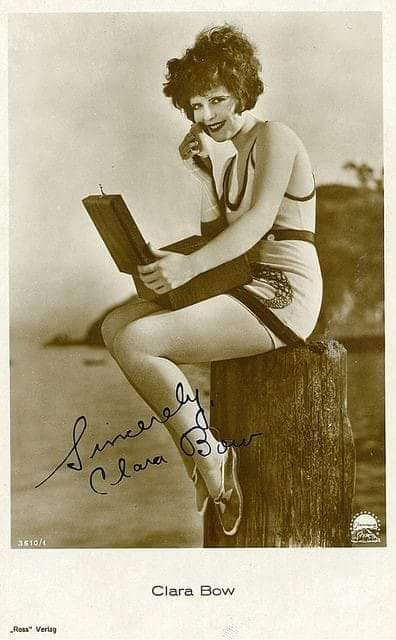 My question is this: Does that look like anything but an open, wooden box to you?

Not to quite a few members of Sin On Celluloid, apparently. To a surprising number, it's something all together different ...

"That was my first thought, too!"

"The bottom's too deep, like a briefcase. Just the way it's resting on her lap, and the top is almost flat enough looking to appear like a screen. Just at first glance, that's what it almost appears ..."

"Is this one of those time traveler things? She is definitely checking her email on a laptop."

"Could be a microphone."

Look at that box again: Laptop computer? I guess ... if you haven't put your glasses on beforehand and you're blind as a bat.

But let's consider this, just in case you happen to be optically impugned. How about utilizing a little bit of common sense? The photo was posted on a site catering to a particular era, an era that didn't know what a laptop was. (Let alone a computer.)

Really, that's all you need to process to come to the conclusion that what Clara is holding couldn't possibly be a laptop.

So, what I'll do is be done with shaking my head in amazement at those comments and toodle along my merry way until such a time I may need to re-evaluate the common sense of some of the group's members. (Or at least their eyesight.)