A Tip Too Much 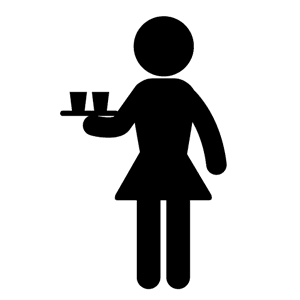 
"You have a choice: We can go out to breakfast today or next weekend. What say you?" I asked.

Off we went. It was decided Mimi's Cafe was the fast breaking point of destination.

When we got there, the place was peppered with only a few patrons. It was still relatively early in the morning, after all, and we wanted to get a jump on our various errands before it got around to Super Bowl time. I had chips to cook, wings to baste, ribs to BBQ and limes to force through the necks of Corona bottles as the big game approached.

We were strategically seated by a young blond kid at the end of one of the rooms, with several booths between us and any others waiting to be served. The place was relatively quiet and comfortable.

My better half ordered eggs and bacon and hot chocolate, I ordered an Andouille and cheese omelet with chipotle sauce and coffee. Our waitress - whose name I didn't catch - was a bit lacking, somewhat clumsy and awkward socially. But she went through the motions and even offered a promotional card which entitling us to meal discounts, free meals, free "crepe" birthday cake on our birthdays as well as an introductory piece of cake to have or take with us that very morning simply for signing up. We partook. (Later, an interesting, delicate piece of cake was presented as a token of appreciation.)

The meal was pleasant enough. Coffee and water refills and checks on our enjoyability didn't come as often as I would have liked, but our experience was easy going and effortless for the most part. 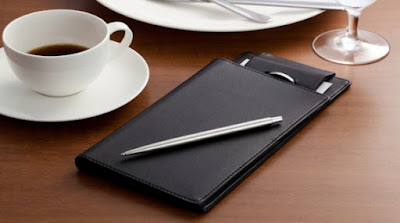 Afterward, when finished, the check came. Missy excused herself and I told her I would hold tight at the table and wait for her. I stole a look at the tab, $28.08, and deposited a couple twenties in the bill sleeve, making certain they peeked out as indication payment was good to go.

I was daydreaming or some such when the waitress (finally) came around and asked if all was fine. Aimlessly I told her it was. She snatched up the bill and exited quickly. Something about the way she took off was a bit out of place and it finally dawned on me she wasn't coming back with any change.

And I remembered: Before we left the house Missy did call that breakfast was going to cost $40.00. Called it to the penny.

.......... Ruprecht ( needs to STOP and think in the future before poo-pooing a restaurant bill )

P.S. "Crepe cake" is a cake made of crepes. (Which I don't like.) Tasting it, it reminded me of cake made out of layers of old tortillas. It was unceremoniously tossed in the waste bin. 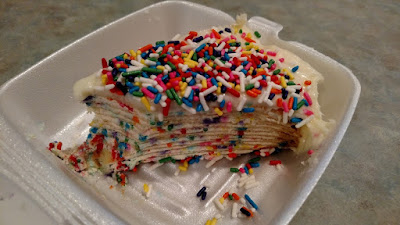