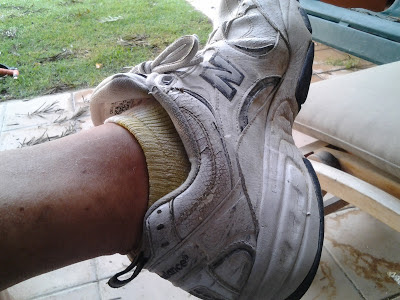 Thursday late afternoon - the day's duties complete - we were "in the midst of a meeting" on the back porch with a couple cold beers being nursed. I brought out stale pita chips and guacamole to compliment our refreshment. We sat and talked about what was on tap the tomorrow.

I was the first to get my butt into the shower so we could venture out to dinner. Little did I know I was supposed to be the keeper of the foodstuffs. (I mean ... I brought out the chips and dip. I was supposed to put them away, too?)

Later that evening, I was informed the dip was not put back in the refrigerator; it was left out.

And it was left out all night as it turned out. Outside. On the patio. All through the 89° night. To turn into congeelee. Great.

Fast forward to the next morning. I got up, made coffee and went out to the patio with my first cup. There was a bowl atop the guacamole. Steve had placed it there to ward off any flies that might come by to sample the stuff. Commendable of him to do so ... but, again, neither of us had remembered to put it back the night before. I lifted the bowl, but I didn't see the plastic container the guacamole was in. What the ... ?!?? Then I realized it was stuck to the bottom of the bowl. I lifted the bowl higher realizing the container was attached. And as I did so it fell onto the table, bounced off and tumbled to the ground while depositing half its contents into my left shoe with more splattering on the ground. Most of it, though, went my way.

Warm, drippy guacamole slid directly into my shoe. Terrific. 6:15 in the morning, the day hadn't even started and I was already a mess. *sigh*

I mopped up as best I could. I got most of the goop out, decided I was clean enough and that it wasn't worth changing socks. After all I was going to be mixing and applying texture all day. I'd be a mess anyway.

Texture mixing was under way. It can be a messy job. Long story short? The over-sized drill with the heavy-duty mixing blade attached shot a load of gray gunk out of the 5 gallon container it was being mixed in ... and arced a perfect trajectory into my right shoe.

My right sock and shoe were that jealous of the left shoe's guac sock they needed attention, too? Come on ... 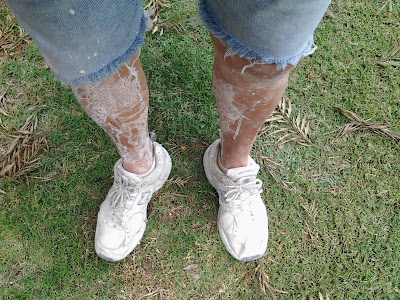