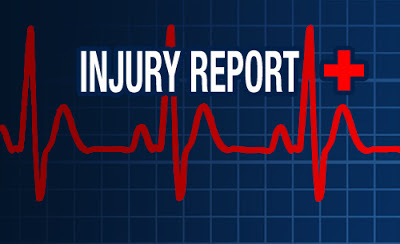 Let's take a look at the "Owie Count" during construction so far, shall we?

10: Various shin injuries amounting to more than a bump but less then a skin tear (results in a bruise at the very least)
1: Attempts at a finger stopping a 9 foot door from closing by jamming it into the lintel
12: Need for Band-Aids
4: Wooden splinters being shoved unceremoniously beneath fingernails
14: Various slips and falls
2: Collapsed scaffolding incidents from insufficient construction resulting in injury to pride rather than to body
4: Twisted wrists from improper use or holding tools
5: Trowel injuries resulting in cuts
7: Blisters
2: Slips on wet concrete
3: Need for Bactine / Neosporin / hydrogen peroxide
4: Falls off ladders
1: Drywall patches falling out of a ceiling and onto the head from not being properly attached
3: Kitchen incidents as a result of preparing food
3: Scrapes from 2x4s resulting in blood flow
5: Smashed knuckles as a result of yanking nails out of walls
11: Incidents of debris being dropped or blown into eyes necessitating brief work stoppages
innumerable: Assaults on the ears due to epithets being yelled out
4: Overly loud sneezes almost resulting in falling off a ladder or scaffold
1: Incidents of heavy machinery throwing someone against a wall, almost tearing off a leg and splaying an individual prone on the floor
1: Deep cuts to the leg as a result of a tile scraping machine's razor-sharp blade
2: Electrical shocks
0: Fatalities (So far so good)

Oh ... don't worry: Tile installation is coming up soon. There's sure to be plenty of injuries during that phase of construction.