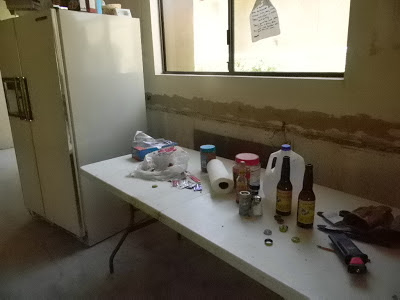 Look: It's a condo. That's being renovated.

It's dusty and disheveled here. There isn't a single blind or curtains on any window in the place. (Hello! It's being renovated! Aren't you paying attention ... !??) The kitchen consists of a refrigerator (contents: beer, milk, beer, salad, beer, gallon water jugs, beer, a watermelon and some other fruit, beer, BBQ sauce, beer, beer and, oh yeah, beer) and a pop-up table with various utensils, paper plates, the occasional clean plastic cup, a role of paper towels, salt and pepper, Cholula and a few other items. The BBQ is our friend.

The bathroom is in shambles, but at least everything "works." (There are towels on the floor from the other guys and the vanity could use a wipe down ... but the toilet flushes, there's a shower, running water.)

The rest of the place is barren for the most part. Tools litter the floor, scaffolding is erected in the living room and bedrooms, walls are currently being "mudded," rags are everywhere and make-shift poles are positioned on pieces of wood for drying our laundry ... when we get around to it.

As mentioned, others live with me here. The owner. His brother. They're kind of messy (I'm the clean one of the bunch so to speak) but everything's amicable.) We have a kid who comes in and assists during the week. We take Sundays off to recuperate from the long week.

This particular Sunday with everyone gone but me, I slept in. (Translation: Up at a quarter past 6 instead of the usual 5:15 a.m.) I got out of bed, put on a pair of flip-flops, headed to the restroom and, shortly thereafter, set the coffee maker on "brew." (Yes! We finally got a coffee maker! Woot!) It's a toss up on any given morning whether I get dressed (or not) the first hour or so.

Luckily this morning I was at least sporting underwear. As I meandered into the kitchen to get a coffee cup, I looked up at the back sliding glass doors with the view of the golf course. There looking back at me was a group of 4 women fresh off the 3rd hole, peeking in at the window.

A couple of them waved. I smiled and waved back.

I approached them, opened the sliding glass door and offered hearty good morning. They commented they loved what we were doing with the place. (This was a clear attempt to distract themselves from the fact I had approached in nothing but skivvies. I mean ... the place is a mess. There's no possible way they could "love" what we were doing ... not yet, anyway. Not in the condition it was in.)

We chatted for a few seconds more and then they left to resume their game. I wished them all good rounds. I turned tail to get my coffee.

I'm betting not. After all: They were on the property looking in at me sans clothes; I was not sans clothes on the golf course ...