Rupe received an e-mail from Wife of Rupe yesterday and it did nothing less than crack me up. Rupe got permission from her to post it with her comments attached. 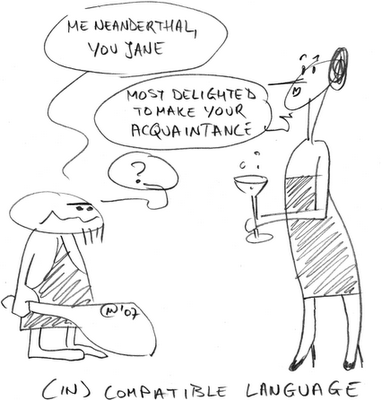 5 Things You Don't Need To Have In Common

If you were to take a an in-depth look at some of the couples who've successfully weathered every relationship storm, you'd be shocked to learn how little they might (superficially) have in common.

Sure it's cute to spend weeknights quoting The Simpsons in unison or have deep literary James Joycean discussions while rooting for the same football team with matching BBQ-tinged fingers, but honestly, many wonderful relationships are built on differences. It's how we vary the gene pool, afterall. In fact, the forces of attraction are so sophisticated that one should always rely on their gut—not clever packaging—when deciding who stays and goes. Below are a list of differences you may share with your significant other, that unlike basic manners, don't have to be dealbreakers. Watch: Dating Red Flags: Do You Ignore Them?

If you're cut from a cloth where self-worth is directly tied to music taste then this one may be tough. You may wince when you find that your bedmate du jour has never heard of Aaron Copland. You may want to run away screaming when they lack much of an opinion about Morrissey (and haven't even heard of The Smiths), but we think this is foolish. Unlike innate kindness or empathy, music knowledge is something that can be taught. And shared. So go and create that mix tape already. Read: Musicians Hear Emotion In Sound

HE IS DEAD ALREADY!!! Holy crap I can't believe they chose him to reference.
(Wife of Rupe has always contended Morrissey is "dead". Yes, Rupe knows - this logic fails me as he is sure it does you reading this. He was "dead" during his solo career ... he was "dead" during his Smiths years. When a song of his comes on the radio, the comment is always "He's dead." She swears she heard a news report stating he was dead and lived by that report to this very day.)

Let's say you make a visit to Barnes and Noble and you're drawn to Nietzsche but your lover is more a trashy memoir/easy beach read type of a person. So what? At least you're both, er, reading. OK, OK, we get it. You may see reading material, education level, profession as a reflection of a person's intelligence—but this isn't always the case, my friend. What you really need to look for is breadth of knowledge in the chosen area. You might be working on a graduate degree in anthropology from a fancy pants university, but what do you know about laying bricks? The scene in My Cousin Vinny when Marisa Tomei unleashes her almost God-like knowledge of car tires and all but frees her man's clients comes to mind as a perfect example.

Are they seriously bagging on my smut books?! Unbelievable.
(Not really so unbelievable as one might think .....)

Yes, birds of a feather flock together and you are who you hang with and blah blah blah. We've heard it. We've heard it all. But just because your boyfriend's college buddies are a poor (very poor) man's parody of Wedding Crashers and you don't connect with her BFF's discussions about The Hills (but is it real?!) doesn't mean this new flame is a no go. Now if you notice a trend that's a bit more, er, red flag-y—say multiple friends in jails across the country—then perhaps it's something to look into. Perhaps.

FRIENDS?! What friends, we alienate them all.
(We do have the proclivity to lean in this direction, Rupe must admit .....)

This one's dicey. You should absolutely err on the side of caution when building a future with someone who, say, gambles away their paycheck. But research suggests savers are attracted to spenders and vice versa. Professors at the Wharton School of Finance and Northwestern University say the spender/saver relationship is just another way in which opposites attract.

We BOTH suck at this so it is mute!
(Rupe rejects this statement completely. Well ........ mostly. Okay, some.)

This one's simple: if you don't like what they're working with make sweet suggestions. No matter where you are there's a mall somewhere close by, an outfit looking for a new home and a credit card just aching to be put to use. Sometimes it is that easy.
Neither of us has style so we were screwed to begin with!
(Rupe has style. He just has no ass .....)