I appreciate you. I really do.

You know how sometimes you get that feeling deep down inside, the one where you say to yourself “Hey … it’s all about me and no one else!” and nothing is going to stop you from stating otherwise? It’s something we all do in some form or another. Often, it’s something we all strive not to do, but we find ourselves falling into that trap time and again, whether out loud for others to hear … or silently within our own consciousness.

Well … thanks to your generous efforts, you made certain I circumvented those selfish thoughts. You made it clear it’s not about me, not at all. It’s about you and your zealous nature, your zeal in expressing the love for your team in their moment of glory.

‘Cause, after Sunday’s Los Angeles Laker victory over the Orlando Magic, I discovered it’s not about the Laker’s decisive win in the least. It’s not about the pride of a city for their team. And it’s not even about shouting out to the rest of the nation Los Angeles is the best in pro basketball at this moment.

It’s about you. You and your asshattery.

You see: I don’t have enough to do. I need to do more. And you helped to remind me of that, too. 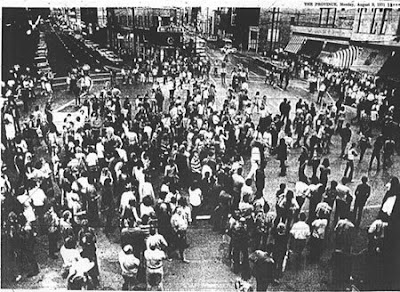 So … here’s to each and every one of you brainiacs out there who celebrated by looting and stealing and starting fires and causing damage after the Lakers spiffy win Sunday. I just want to say thanks.

It only took you a moment or two to turn my selfish thoughts to something else. And I appreciate that more than you know.

Yours Sincerely (and unselfishly) .....

"Classy. You know, Boston may have a Puritan reputation, but at least we don't tear our city apart when our sports teams win." - Justin Hall

"What a stupid spectacle. Look at Tehran right now and then look at Los Angeles. They fight for their freedom. We fight for sneakers." - Commenter


"This is truly sad that a very small minority of so-called Laker fans can turn what should have been a celebration into an excuse for a riot. They are not in any way, shape or form to be considered sports fans, they are nothing more than punks and thugs and they make me ashamed to be a Los Angeles native." - Commenter


"What scumbags ... I hope that anyone who sees the face of someone they know in the many L.A. Times photographs taken last night calls the police and turns those people in. Everyone who took part in the theft or vandalism, or knows someone who took part and doesn't do anything about it, should be ashamed and know that they represent the WORST of society." - Commenter


"Another splendid display of downtown L.A. civility. A bunch of stupid hoodlums." - Commenter