One of the last joyous times I had with my father was at his house in North Port, Florida more than two years ago.

It had been some time since he'd had a poker party and he was going to have one come hell or high water.

Guests were hailed. Food was purchased. Booze was put on ice. 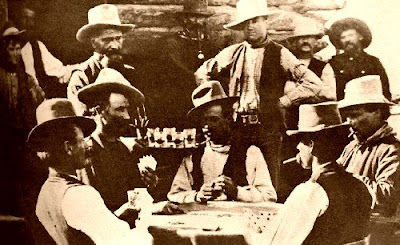 Promptly, at the time indicated, a slew of friends and cohorts arrived, ancient and spry. I was introduced to each and every one of them. I heard more "Your father has told me so much about you!"-s, the smile that resided on my face had to have looked rote to anyone else that knew me. But not to these folks. It was genuine to them. They were indeed glad to see me. They were thrilled to have finally met me. And I them, no matter what my face might belie.

You see, this was the first visit I had had with my father in five plus years, since he swung out my way when I was last in Utah, on his way to his new digs in Florida.

He had ravaging cancer, you see. That was the reason I was there.

While playing poker, he cajoled and spit sarcasm and laughed and denied stories his friends told. It was indeed a sight to behold. It had been a long, long, long time since last I saw him have such unencumbered fun. And it would be the final time as well.

Early the next morning, I would have to call an ambulance to get him to a hospital. And I would spend the next few days in the hospital with him. He would recover enough for me to be able to leave, as scheduled, for home. He was cognizant and smiling and back to his stubborn, unemotional self when I left. His wife, I knew, had her hands full in the coming weeks.

I was back less than two months later. I was able to see him before he passed, coincidentally the night I got in. He was aware I was there, but that's about it.

Between talking to him and praying for him, I reminded him of that poker game a few months prior. I think it was the last time I saw him smile .....