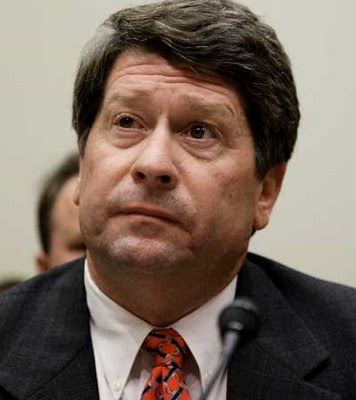 Stewart Parnell, president of Peanut Corporation of America, linked to a massive salmonella outbreak in peanut products, refused to testify at a Congressional hearing February 11th as lawmakers accused him of caring more about profits than food safety.
See if it’s difficult to presume innocence for this guy after you read the following:
- Told by a plant worker in June that nuts had tested positive for salmonella bacteria, Parnell e-mailed back: "I go thru this about once a week ... I will hold my breath ... again."

- An e-mail by Parnell seemed to show a focus on profit over safety, despite a positive test for salmonella in 441 cases of peanut granules, some of which already had been shipped.

- Parnell’s actions - blamed for 600 illnesses and nine deaths to date - prompted one of the largest recalls ever, with more than 1,800 products pulled from store shelves across the country.

- Parnell urged staff to "turn the product loose" even when warned of contamination for a deadly salmonella outbreak.

- Parnell expressed concern about testing costs of his products. According to an e-mail, one of his plant managers told him a product had been shipped that tested positive for salmonella. The product would be retested, he was told. The plant manager also told Parnell that customers receiving the product should put it on hold. A week later, an e-mail from Parnell said, "We need to discuss this …. The time lapse … is costing us huge $$$$$" and that PCA needed to "protect our self and the problem is that the tests absolutely give us no protection."

- Charles Deibel, president of Deibel Laboratories, testified that his company tested Peanut Corp. products and notified the company that salmonella was found in products originating at its Georgia plant. "It is not unusual for Deibel Labs or other food testing laboratories to find that samples clients submit do test positive for salmonella," Deibel said. "What is virtually unheard of is for an entity to disregard those results and place potentially contaminated products into the stream of commerce."

- During the congressional hearing, Representative Greg Walden (R-Ore.) held up a gallon-sized bucket wrapped in yellow crime-scene tape - presumably containing some type of recalled peanut butter product - and asked Parnell whether he would be willing to "take the lid off" and eat any of it. Parnell invoked the 5th Amendment. (He took the 5th Amendment over and over and over again during the hearing.)

- Also during the hearing, Committee Chairman Bart Stupak (D-Mich.) asked Parnell: "The food poisoning of people, is that just a cost of doing business for you?" Parnell said nothing.