There's so much to convey, it's mind-boggling. And probably would be painfully boring to most that will read this. Suffice to say the entire event was fun-filled, frantic, overwhelming, exhausting .... yet completely satisfying.

So, what I'll do in my overwhelming-enormitousnous will be to simply jot a few notes, post a few photos and blather a bit of commentary. Otherwise, I will be blogging for a week. And if'n I do that, it'll be inconsiderate.

But I do have to highlight a specific moment that made The Con special for me. Bear with me - I will point it out detailingly and glaringly.

The Con began with a Wednesday night Preview Night and went on through Sunday.

My buddy I went with - who I go with every year - turned to me Saturday afternoon and made the first move:

"I dunno. Whatter you gonna do?" I asked.

"I dunno," was the response.

He and I do this every year. It's an ESP thing.

There comes a point where we've seen all we need to see, gotten all we've needed to got, met everybody we've come to meet and that's all there is to it ..... even if there is another day or so left. (In recent memory, I can't remember having stuck around for the final Sunday of The Con .....)

So ... it was off to Dick's Last Resort for the conclusion of a spifficated, long weekend to quaff a few beers. (But that's another story .....)

Of course, there were amazing busts and creations that were drooled over. Below are a few I gawked at, covetously ..... 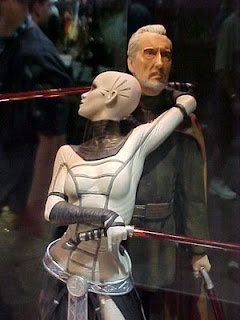 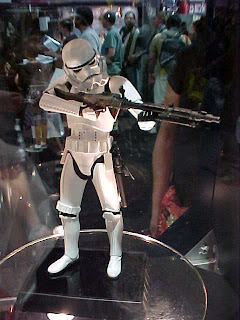 A spiffy rendition of a Storm Trooper ..... 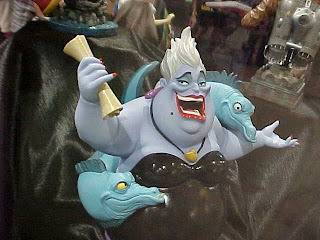 Ursula from The Little Mermaid
(Available early next year. S'on my list of "things to get" .....)

There were, of course, numerous Tom Foolery costumed characters to be seen and bumped into ..... 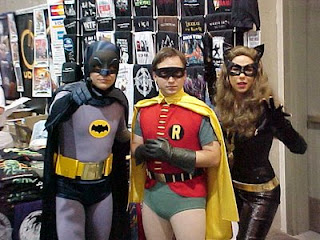 Some were so realistic looking,
it was as if you were transported right back into the '60's ..... 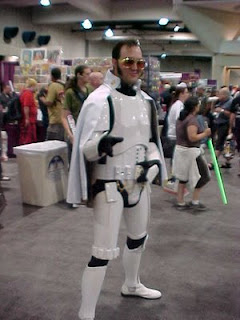 Others, not so much.
(Proof that "Elvis Is Everywhere". He's even in Storm Troopers .....) 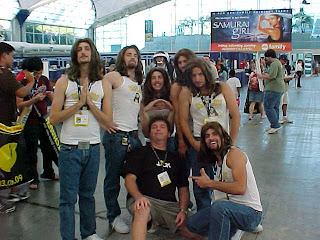 And I have no idea who these guys were,
but they'd been wandering 'round for days.
So I had to get a picture with'em .....

Then, there was frolickry and monkey business to commit: 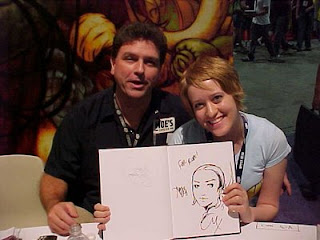 Sketches from redheads to snag ..... 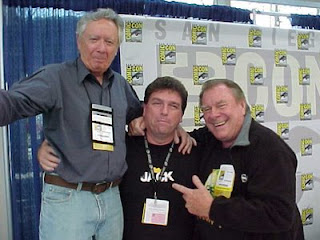 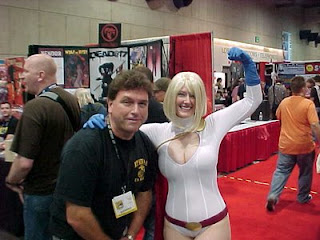 Daring-do costumed (and rackified!) super-heroines to be conquered by ..... 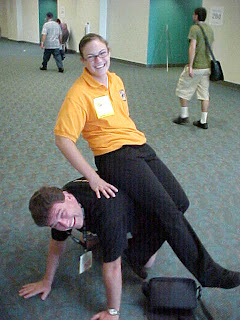 Security personel to lend a restful back to ..... 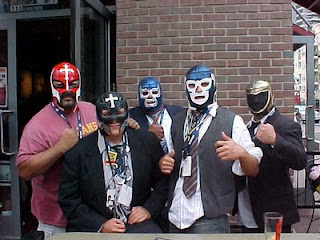 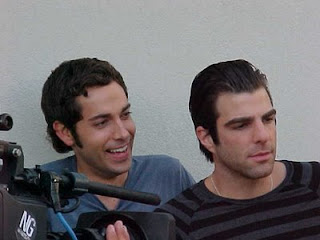 And, naturally, celebrities to snap pictures of .....
(Zachary Levi from Chuck and Zachary Quinto, Sylar from Heroes ...
Zack Q. plays Spock in the upcoming Star Trek film, by the by .....) 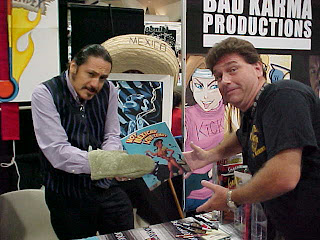 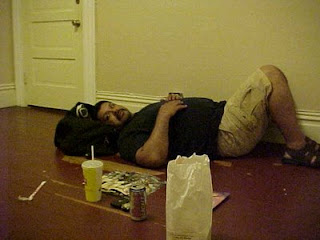 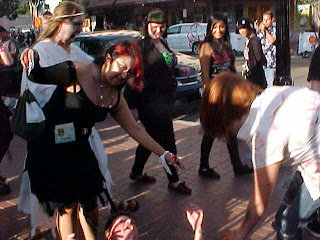 As well as ravenous zombies wandering the streets to be eaten by .....
(I'm on the ground, barely in the picture,
with entrails being spilt on the sidewalk.
Damned zombies ..... always hungry, always attacking)

Good times all around.

Now, the defining highlight of The Con for me: 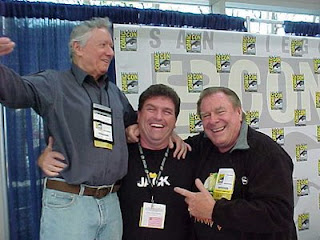 The gentlemen in the photo above are Jim Warren (left) and Verne Langdon (right). (I've no clue who the guffawing bonehead is in the middle.) I was passing by and noticed Jim, the publisher of Famous Monsters Of Filmland, an old monster magazine I frequented in my youth. I had to meet him, tell a quick story and get his autograph.

While in line, a security chick came by handing out one dollar bills. She explained they were from Jim Warren. He was concerned by all the fans waiting in line. He knew the wait was taking some time (there were a few asshats that wanted everything under the sun signed by Mr. Warren) and he wanted to show his appreciation.

As I finally got up to the front of the line, I didn't notice who Verne Langdon was right away. I'd never seen him previously. Verne was the creator of all the spiffy rubber monster masks that graced the "Captain Company" ads in Famous Monsters. What a thrill! I remembered reading Famous Monsters as a lad and being envious of those Dracula and Frankenstein monster adornments, but didn't have the funds to afford them.

Welp ..... up I went to meet Verne firstly. He was gracious and warm and a big bear of a guy, genuinely thrilled to be there. I told him my tale and he took time to listen considerately. I asked if I could get a photo with he and Jim once I was done talking with the both of them. "It's expected!" he cried.

I moved on to Jim Warren. I extended my hand warmly and told him: "Mr. Warren, I have two things to tell you ....."

He got up out of his seat, leaned over the table toward me, put both his hands on my shoulders grandfatherly-like, looked deeply into my eyes and asked kiddingly with a smile: "Are these going to be long stories?" I cracked up and assured him they were not.

I told him Famous Monsters was a forbidden read by my mother those long years ago, but I snuck them in my room after clandestinely purchasing them at my local 7/11. And I read them voraciously, I told him. I remembered his name on every issue and wondered who this guy was that published this wonderful magazine. So it was a thrill to meet him.

I went on to tell him I've been to many conventions and not once, not one single time, had I ever had anyone supply ME with money to get an autograph. It was always the other way around.

"Let me tell you something: All those artists and celebrities that charge outrageous amounts of money to give out their autographs have forgotten who it was that made them famous in the first place. I'm thrilled to have you come up and grace me with a request for a John Hancock or a picture. You, sir, are MY fan ... and that's why I give out money to you."

Un. Freakin'. Heard. Of. I was thrilled to hear this from him. I thanked him mightily for his time and consideration, shook his hand warmly and told him I wasn't leaving without a photo of he and Verne and I if it was all right. He insisted.

Around the table I went. I told Verne to keep seated (he was severely handicapped and it was difficult for him to stand) but he wouldn't hear of it. I helped him up and, while doing so, Jim stood on the chair he was sitting in to let everyone know who was boss. I turned to put my arm 'round him once I'd assisted Verne upright and doubled over in laughter at Jim's theatrics.

The result is the photo you see above.

It was a defining moment for me. Noteworthy and special as all get out. Jim even signed that dollar bill for me.

There's tons more to tell, but that's enough. A "Part Two" might be in order later.