Really ... Aren't They All Songs Of Ill Intent? 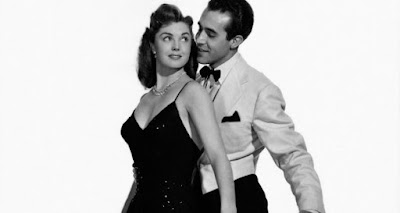 My friend Renee - one of the few I have left on Facebook, as many seem to be dropping like flies for one reason or another - noted her frustration with people in general when it comes to Christmas tunes by posting something someone wrote somewhere. (Was that vague enough for you?)

But I'll back up a bit to where it all started, with the holiday classic "Baby, It's Cold Outside." A little history on the tune, originally written in 1944:

"During the 1940s, when Hollywood celebrities attended parties, they were expected to perform. In 1944, Frank Loesser wrote "Baby, It's Cold Outside" for his wife, Lynn Garland, and himself to sing at a housewarming party in New York City at the Navarro Hotel. They sang the song to indicate to guests that it was time to leave.

"Garland wrote that after the first performance, "We become instant parlor room stars. We got invited to all the best parties for years on the basis of 'Baby.' It was our ticket to caviar and truffles. Parties were built around our being the closing act." In 1948, after years of performing the song, Loesser sold it to MGM for the 1949 romantic comedy Neptune's Daughter. Garland was furious, and wrote, "I felt as betrayed as if I'd caught him in bed with another woman."

"In the film, "Baby, It's Cold Outside" was sung by Esther Williams and Ricardo Montalbán, then by Betty Garrett and Red Skelton, who reversed the roles. The song won the Academy Award."


So ... was it a song originally written with ill intentions (read: rape) in mind? No, no it wasn't. Our monkey business society of do-gooders and political correctors has riled the masses into a froth about the songs "true" meaning, throwing its original lyrics (not to mention the societal norms of the time, the 1940s) by the wayside for their own purposes, mainly in order to cry wolf.

And that is the lead in for the post Renee offered below. I don't know who the original author of the following was and it is of no concern. It just so happens I agree with her/him. Because it's all about context and the timing of when the writers wrote the songs.

Welcome to the 2018 holiday season.

"Just a little reminder how ridiculous society has become ...

"Since some radio stations decided to pull 'Baby It’s Cold Outside' from its playlist because someone was offended, shouldn’t these songs be pulled as well????

3. Holly Jolly Christmas: Kiss her once for me? Unwanted advances

6. It's The Most Wonderful Time of the Year: Everyone telling you be of good cheer? Forced to hide depression

8. It’s Beginning To Look A Lot Like Christmas: Forced gender-specific gifts, dolls for Janice and Jen and boots and pistols (GUNS!) for Barney and Ben

10. Frosty The Snowman: Sexist; not a snow woman

11. Do You Hear What I Hear: blatant disregard for the hearing impaired

12. Have Yourself a Merry Little Christmas: Make the yuletide GAY? Wow, just wow

14. Mistletoe and Holly: Overeating, folks stealing a kiss or two? How did this song ever see the light of day?

16. Grandma Got Run Over By A Reindeer: Woman attacked & Grandpa gambling."


Now ... I don't claim to be politically correct by any stretch of the imagination. Matter'n fact I'm certain I've raised eyebrows, caused Facebook desertions and much, much more with some of the things I've said and written.

And that, folks, is why a "delete" button was invented.

Meanwhile, I'm listening to every single one of the tunes above without any compunctions whatsoever.

In fact, while playing them, if I see someone who screws up their face in distaste at my musical proclivities, I'll probably just turn up the volume.