23 Years Ago In Irvine, California 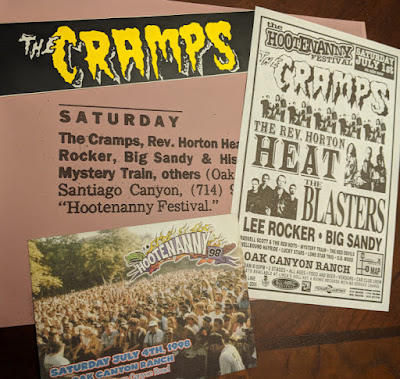 Prior to the month running out, I wanted to take a minute to note the 23rd anniversary of The Cramps headlining performance at The Hootenanny Festival.

The festival, located in Oak Canyon Ranch in Irvine, California, is an annual one-day event incorporating some of the biggest names in rockabilly, psychobilly, Americana and country, punk and, fairly recently, Celtic music. Every incarnation has hosted a vintage car show as well.

While celebrating festival's 23rd birthday, the years have been hit and miss with regard to the living legends who have graced the stage. Of the more notable acts, Jerry Lee Lewis, Chuck Berry and Little Richard have appeared along with next-generation heroes such as the late Joe Strummer, Chris Isaak, X, The Blasters, Stray Cats and Social Distortion.

I was fortunate enough to hit The Hootenanny for the very first time in 1995 (its first iteration, as a matter of fact) on nothing less than the 4th of July with the Rev. Horton Heat, The Blasters and Stray Cats' bassist Lee Rocker warming up the stage for Lux Interior, Poison Ivy and Company.

By 1995 I couldn't tell you how many times I had already seen The Cramps live but it was some inordinate number. Never once before The Hootenanny, however, had I witnessed them perform in the light of day. That was a rare treat indeed. The anticipation at the start of their set was electric. Had The Cramps - bonafide legends of night time shows - ever been seen in sunshine? Would they melt? Would they vaporize when they set foot on stage? Would their paleness be able to withstand even 5 minutes brightness?

In answer: No, not a bit and yes, for 75 glorious minutes of hip-grinding, Elvis-enfused, American punk from the prime innovators of psychobilly. What a treat.

Here was their set list that day. (Yes ... I wrote down each and every song performed ...)


I probably attended another half dozen Cramps shows post-Hootenanny until the band disbanded (Lux died in in 2009) ... but I never heard another instance of them playing a daytime show.

Bonus: While not from Hootenanny itself, here's a '95 live performance of the band doing "Ultra Twist."