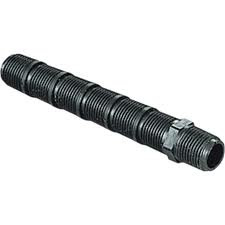 This is a sprinkler riser ...

When I moved to Northern California, things were rough employment-wise. It was incomprehensibly difficult to land a job.

In the midst of hunting and searching and submitting resume after resume after resume for months on end, I worked countless odd jobs. Gutting houses, building walls, jackhammering sidewalks, pouring concrete, clearing brush ... anything to keep busy until something solid finally came my way as a result of all my pursuits.

One job I landed was rebuilding a backyard deck, a job that took the better part of a week for a little old lady - Mary (not her real name) - I still help out to this very day. That deck job I did for her, turned into basic upkeep of her house and yard, from gardening and lawn care right on down to digging beneath her front patio and driveway in search of a plumbing leak. (That was a nasty, dirty, thankless job, let me tell you.)

We have a great relationship: We both respect each other while giving each other healthy doses of what-for because that's our natures. She's a little fragile, often falls down because her legs aren't what they used to be. Often, I go to her house to find she's got some new sort of bruise or another. And ... she's a bit ditzy. Naturally, our affiliation has led to some interesting moments. Here's one of them.

The phone rang one morning before I had scheduled to run over to her house and I answered. She wanted me to run by Home Depot (which she interestingly refers to as "Home Deah-poe" for some reason) and pick up some sprinkler risers she ordered before I came over. I told her no problem, that I'd be happy to. "It's under my name" she informed me. "They came in. I already paid for them, too."

I got to the store and went to the will call area, asking for an order under the name of Smith (again, not her real name). a few minutes of digging around in a holding area did not produce any fruit. "What name is it under?" the clerk assisting me asked. "I'll look it up on the computer."

I old him and he searched. Nothing came up. "What was it that was ordered?" he asked.

"Sprinkler risers" I answered. "The person who ordered them said a 'Matt' was the one she ordered them from."

More searching and squinting at the computer. "What was the name they were ordered under again?"

"Smith" I stated once more.

"Not that I'm aware of. Can you pull up 'sprinkler risers' or 'plumbing' and look it up that way?"

"Nope. How 'bout a phone number?" I gave the guy her home phone number as well as her cell number just in case. "Nothing there, either. Let me scrounge around in back once more. I just don't see anything that looks like sprinklers or sprinkler risers. Give me a sec ..." and he was off to search once more.

Three minutes later he was back. "Sorry, sir ... I can't find anything. No Smith, no sprinkler anything ... and I checked everything."

"Really? They just called me this morning and told me they were there. That's strange ..."

"Who did you talk to here?"

"I'll see if that trips a trigger," I said and hung up.

Nuh-uh. 'Matt' was called and didn't remember anything about any plumbing supplies requested or ordered. I was at a dilemma, there was nothing further the guy helping me could do. I called Mary back once more.

"They can't find anything? How can that be when they called me this morning and told me they were in? Try 'Wesson-Smith' ... my married name. I might have ordered them under that ..."

"That information would have been handy to begin with, Mary," I chided her.

I went back to the will call area and a new employee was behind the counter. I brought her up to speed and gave her the new name it could be under. More ruffling about in the back and she came out with a box. "There's nothing with any plumbing back there but there is a name 'Wesson-Smith' on a package. Could she have gotten what she order wrong?"

"I don't think so. She was adamant it was sprinkler risers she ordered. Can I see the package, just in case?"

"Sure," I was told and she disappeared in back a final time. She returned with a rather large box, one too big to hold sprinkler risers I noted. She opened it and showed me the contents. 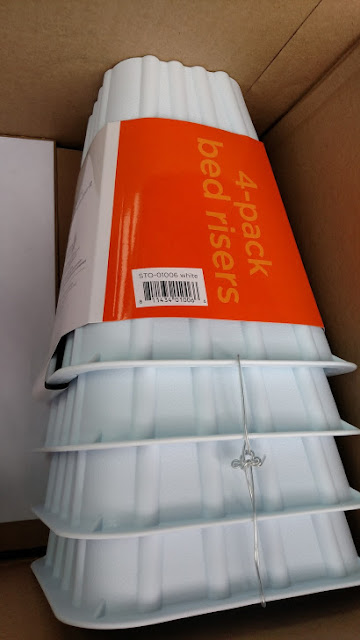 Inside were four nestled together, white conical pieces of plastic that were the furthest things from sprinklers or plumbing supplies you could get. The 'riser' moniker, however, fit perfectly. Because what they were, what had been ordered, was a set of four BED risers ... not sprinkler risers. I had to chuckle to myself. I told the clerk that was what was ordered. "These aren't sprinklers" she said.

I headed out of the Home Depot parking lot with thoughts of semi-scoldful reprimands being launched Mary's way when I got there as to what she ordered and under what name she ordered under ...