I Miss My Gorilla


I miss my gorilla.

Well ... he really wasn't my gorilla. I had him but a couple of days.

I saw this gorilla on the floor in one of the main hallways at work, partially hidden beneath a set of cabinets. Someone probably dropped him and didn't realize it. For all I know he could have been part of a waste pile destined to be dumped.

So, I picked him up and made him stand guard on a rack in a utility closet ... where I promptly forgot him. 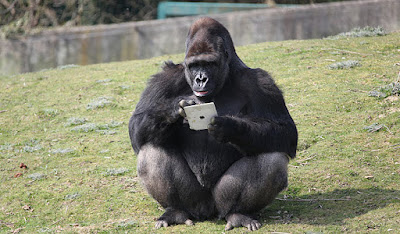 Not the gorilla I had guarding the closet ...


I stumbled on him once again when I went back into that closet and decided of a sudden it was probably best to set him out near where I found him. With a note attached:

"Is this your gorilla? I found him on the floor a few days back. If no one claims him he'll become my mascot.


There was an outcropping where all passersby could see him, especially that person who might have lost him in that particular hallway.

Within a few hours of putting him out, someone had nabbed him.

I just hope it was the person who "lost" him in the first place ... and no one else.