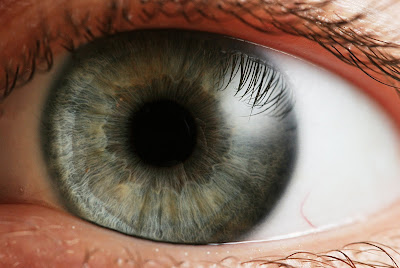 Warning: You are hereby warned the following contains content which may cause those with weak constitutions possible bouts of uncomfortability.


"Well ... we're looking forward to this. It appears you are, too, being you arrived 10 minutes early."

"You were the one who made the appointment. Don't get snippy with us."


I arrived at the doctor's office for my eye surgery promptly at 11:10 a.m. Tuesday.

I was calm enough. I've never been not squeamish, I'm not afraid of blood or needles, I can tolerate a fair amount of pain and the thought of undergoing a minor surgical procedure while awake didn't disturb me in the least. The thing I was twitchy about? It was going to take place in plain sight, literally. Right smack dab in front of me. I was having work done on my eyelid and I would be witness to the entire thing.

"The doctor said he was giving you a local. You won't feel a thing. We'll see if that holds true."

"I realize that. I'm not concerned about that. It's just I'm subjecting myself to violation of my Eye Rule, that's all ..."

"Grow a pair, big boy. You'll weather the storm just fine. And, if not, you'll still have one good eye."


A bit after the appointed time, I was shuttled into a surgical room and was seated among various equipment. The nurse who escorted me told me to sit and handed me a release form, explained it to me and asked me to sign it when I had read it. I scanned it and added my John Hancock. "Any questions before the doctor comes in?" she asked.

"No ... other than I'm still having a hard time believing this is nothing more than a cosmetic procedure when I have pain and irritation, one of the reasons I'm subjecting myself to this ..."

"Did you inform the doctor of that?"

"Yes, as well as the nurse who scheduled my appoint last week."

As we were discussing this the doctor walked in. The nurse looked up at him, then back at me.

I continued. "I'm still going to aggressively look into the situation and pursue reimbursement for the procedure," I told her.

The nurse looked back at the doctor and asked him something I didn't quite catch.

"We're not going to do that," the doctor replied as he turned to me and asked how I was doing.

"Fine," I responded. "Looking forward to this being over."

"It shouldn't be any problem. Again, you're going to get a local, then I'll get to work. Just try and relax." He stood over me, looked me in the left eye and suddenly held up a syringe. "This might sting a bit. Try not to move. I'm going to clean around your eye with iodine."


Iodine dripped down my face and he caught it with gauze. A pause, then it was go time. A needle came into view.

Suddenly, I yelled inside my head:

"Unclench your hands and concentrate on keeping them open. That might help."

Honestly, it wasn't that bad. I've poked myself in the eye and it's hurt worse. Still, I was flinching and blinking furiously. Stuff comes near my eyes and I go into hyperdrive.

"I remember you telling me you're sensitive about your eyes," the doctor said while working. "That's natural to everyone. We have a predisposition about our eyes ..."

"I'm several points higher than your average everyone," I confessed to him. "I'll do my best not to blink, though." He smiled.

A minute or so went by while he fiddled with items on a tray beside him. Then he prodded my eyelid with something. "Feel anything?" he asked.

"That's the first thing they ask before they remove the eye, you know ..."

"He could slip. How old is this dude, anyway?"

"Okay ... here we go" the doctor announced. Another implement came in view. I didn't recognize it. I felt him tug on my eyelid, but it was a dull sensation, I barely felt it. Fortunately I didn't feel any cutting or scraping as he began removing the papilloma on the edge of my eyelid.

He worked for some minutes, daubed at my eye, then came at me with yet another tool.

"Almost finished," he announced. "We're just going to close this up."


Suddenly I saw smoke tendrils snaking up into the air.


I didn't feel anything but suddenly there was that familiar tang of singed flesh in the air. It was cauterizing time. I'd forgotten about that. I concentrated on my hands to make certain they were unclenched. They were.

And then ... he was done. "I'm just going to put on some ointment and you're free to go. Any complications - and I don't expect there to be any - just give the office a call," he offered.

"Well, that was no fun. I was looking forward to some hysterical dramatics."

"We should know better. He talks big talk that that's going to happen but he rarely delivers on the promise. Try as we might, you know it's difficult to get to him ..."


I ignored the voices and spoke to the doctor. "Thank you. Hope I wasn't too twitchy. On a scale of 1 to 10, 10 being worst, that entire procedure was a .5, doc. And that was appreciated." He smiled and waved me off.

"Okay, you're free to go. I'll accompany you out," the nurse told me.

I got up out of the chair and followed her out. We got to an interior reception area, she handed a file to someone behind a computer and told me to call if there were any problems or concerns.

I was surprised. Abundantly so.

I got to my vehicle and looked in my rear view mirror. It looked as if I'd been in a fight. But I wasn't in any pain. I could feel swelling, a touch of numbness, I was black and blue from the shots but unexpectedly comfortable.