Understand: I had a great time at the Sacramento River Cats game Saturday night against the Tacoma Rainiers. (When the home team walks away with win, everyone at the stadium is in a good mood.)

But I was taken aback at a few items in and around the West Sacramento locale.

Cobwebs and dirty seats were a few of the off-putting things of note. Yeah ... the seats were probably wiped down from the previous night with less-than-clean towels leaving a dirty residue on them.

But ... cobwebs all over the place?

Fortunately, there's a recourse. Or so I thought. There's a big banner on the outfield wall that says to "text 'Foul' and the problem/concern" to a particular number. And that's just what I did.

The result? See for yourself: 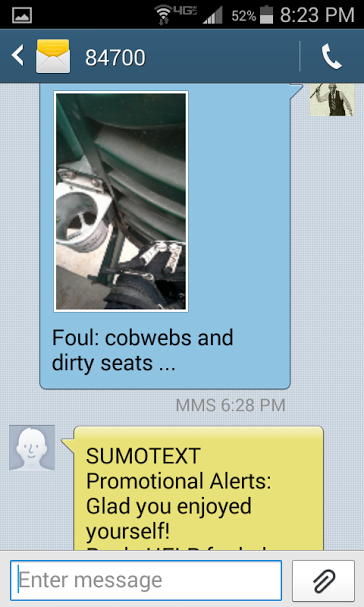