How could I not? The prospect of meeting Barbie™ live was on the horizon. I could barely contain my giddiness. 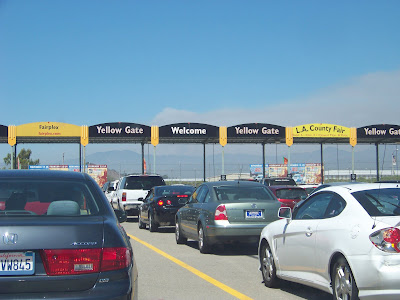 Fair time in . Quite a few county fairs have already come and gone this year, but The Los Angeles County Fair just got its start with a rare Labor Day Weekend commencement. And we were off to see what we could see.

Part of the draw of attending the Fair was the fact it wouldn't cost us $58.00 just to get through the turnstile. All weekend long, if you arrived between the hours of and your admission was just a buck.

So we paid for parking, got a parking space as close as possible (always an adventure with Rupe and family at any venue or event we happen upon) and then made our way to the entrance to obtain our admission tickets. 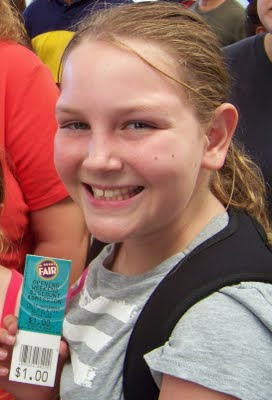 And right off the bat, the fun began. We got a preview - and it wasn't a little one - of what we could expect for the entirety of our stay at the Fair: Lots of bad tattoos, lots of comical (and otherwise) T-shirts. 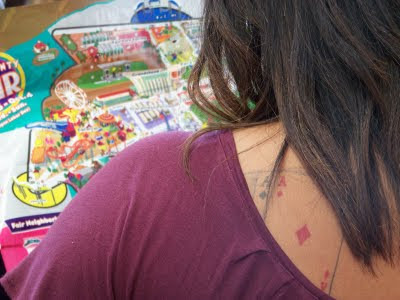 License plates abounded. (You know, those tattoos on the small of women's backs? Some call'em "tramp stamps", Rupe calls'em "license plates".) Arms filled with images of moons and rainbows and skulls and ribbons. Shoulders adorned with sunbursts and enter-connecting Africanesque symbols. Ankles encircled with ink. Knuckles with letters. The back of necks with "Pachuco" and "Chewie" and "Flaco".

There was one thing immediately evident: There were a lot of bad tattoos that would be witnessed this day. You'd think some of these folks would at least hit up a professional to have their tats done cleanly, not "Cheap Eddie" down the street. Amazing.

Mix up a mass of people and their T-shirts and you have an instant Fun Fest..

Once inside the doors, we thought it best for the girls to ride a few rides so that 1) they got off to a rousing start, 2) bumpy, jaunty rides are best ridden without anything in the stomach that could expel; and 3) because the lines were short enough that it made sense to do so sooner rather than later. Because those lines would swell into lengthy, sweaty, snaking time wasters, made up of kids of all ages. Add a little heat and you have the perfect recipe for crankiness. 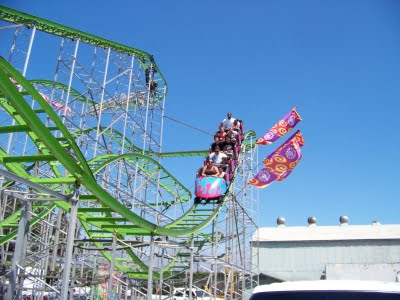 The girls hit a couple roller coasters, a mirrored fun house and tried their luck at a few games. Riley - an excellent free throw shooter - immediately tagged an "I-only-need-one-shot" at a hoops booth for a monstrous Houston Rockets basketball prize in need of deflation in order to be carried around the remainder of the day. The prize she won appeared to be one of those ergonomic office sitting balls, not something that should be transported home as a souvenir. The little one wasn't so fortunate, but her time would come later. 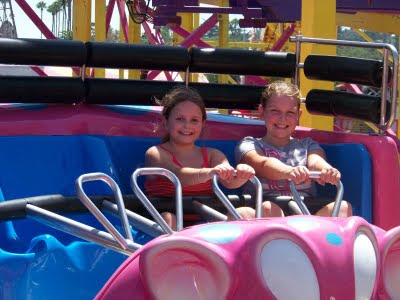 So, we continued on. A giant pickle and a Coca Cola tucked contentedly in our stomachs, we meandered about oooohing and aaaahing at various sights. Dea commented how - in all our visits to the fair - we had never purchased anything other than food. (True fact.) Reed wanted to take a tour of the fairgrounds courtesy of the Sky Gondolas - a family tradition that would be quietly quashed for 2009. A giant turkey leg, hot dogs and snow cones were consumed.

The crowd slowly began to swell. It was already approaching the 90 degree mark. And it was barely in the afternoon.

What to do .... what to do. Why ... the farm animal exhibits, of course! Wherein goats milk could be drunk! Sheep could be viewed in the process of being sheared! Stank and stank could be experienced! Cows and goats and pigs could be fondled! And so we were off to the animals .....

And, let me tell you, it was no small task getting to those animal pens. It seemed the whole of was making their way to that portion of the fair just the same as we. But arrive there we did and without disappointment. We saw cows. We saw cute calves. We saw alpacas. We saw goats. We saw rabbits. We saw reclining, sleeping swine. We saw goats ripping up the displays on walls. 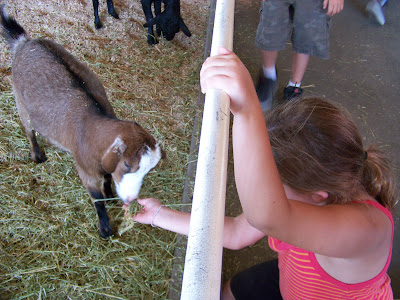 We saw a mustachioed gang member in a "Don't *#&$%! (expletive deleted) With Me" shirt. We saw crying kids. We saw the world’s most massive afro ever atop a teenager’s head. Fun was had by all. 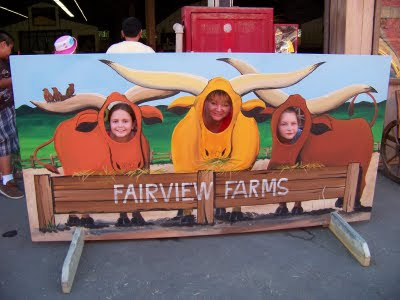 And, of course, there were the obligatory photos we had to take with our heads stuck through cut-out, painted plywood dotting the fair landscape. Humiliation was never so much fun. And, speaking of humiliation, I don't know how appropriate this declaration was, right there in full view of the swine: 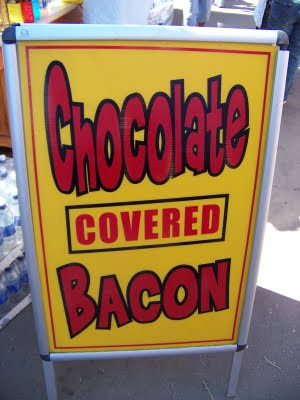 Plus, there was the family water trough cooling off spectacle. An Icee was a good call being we were all thirstier than thirsty from our trek through the sweaty pens. 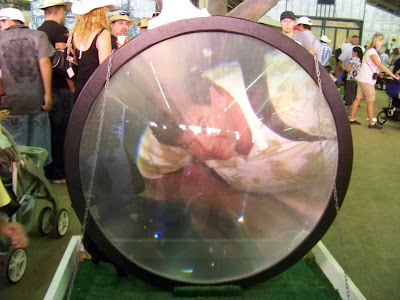 I checked the time.

"Oh, my. Look at the time. We need to head over to the Palms Marketplace where the Barbie™ Live Meet & Greet with the ultimate princess is taking place at The Family MarketPlace Stage, presented by Farmers Insurance!" Rupe exclaimed. And we were off.

Twenty long minutes and a few wrong turns later, we found the stage. It was just past the hour when the show should have begun. Barbie™ should have been doing her thing up on the colorful platform. But what we saw when we approached was nothing of the sort. There were lots of folks sitting about, waiting for the show to begin .... but there was nothing at all going on. 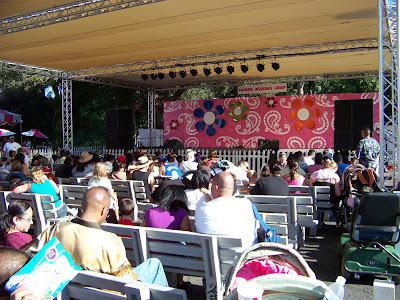 I wandered around, looking for any sign of an impending act or appearance. I found nothing. I poked my head into the booth with the soundboard. No one home. I (shouldn't have) meandered down a set of stairs behind the stage to see what I could see. I saw a worker taking a nap on the grass. I saw a water cooler. I saw nothing else. No performers … no Barbie™ … no props … no outfits. Nothing. 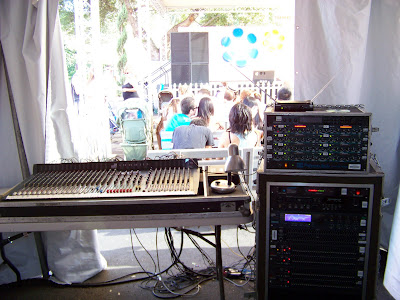 I wandered back to our seats. We waited 10 more minutes. It appeared no one was going to appear, least of all Barbie™.

This guy, however, did come out: 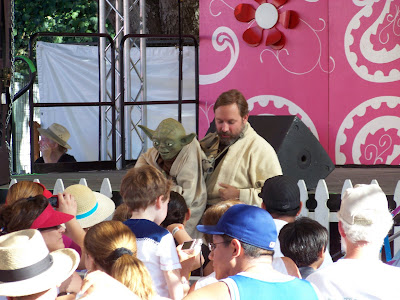 Yup. Some dude dressed in an Obi-Wan Kenobi Star Wars Jedi Knight get-up with his hand shoved up a Yoda puppet.

It was disappointing. All geared up to see Barbie™ and hopes dashed like an unwanted corndog wrapper. I even later heard Barbie™ was a no-show at a few other appearances that day. What was the world coming to? When an icon can't take the time to bring a little joy to hundreds of wide-eyed girls in love with her? What a shame.

As we made our way to the exit, the girls eyed bungee jumpers leaping off a crane 130' in the air. We paused to take in the spectacle. Some we saw would surely be in need of a chiropractic visit the following day. 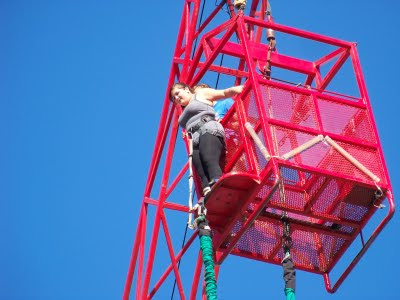 In between jumpers, there were a few more T-shirts to read. "I Believe I'll Have Another Beer". "I Cared About What You Had To Say Yesterday". And Rupe's favorite: "Bacon Is A Vegetable". There were scads more tattooed fairgoers to ogle as well. 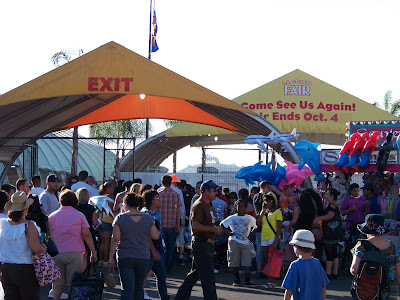 Finally, we headed for the exit, the fair's wares and attractions behind us. We looked at each other and smiled. We asked if everyone had fun. It had been a long, long, good day and we were all tired. Fortunately, home wasn't too distant a jaunt.

And Barbie™? Well, she would never know the photo opportunity she missed out on with yours truly .....