I was stopped at a traffic signal.

See, I was positioned just before making my way into the left turn lanes of a particular signal, still in the single lane prior to being able to make my way in either of two turn lanes. But with heavy traffic backed up so I couldn't quite make it into the lanes, there was nothing I could do but hold tight and wait to move forward. Even then I figured I wouldn't make the next green signal - there was that much congestion. 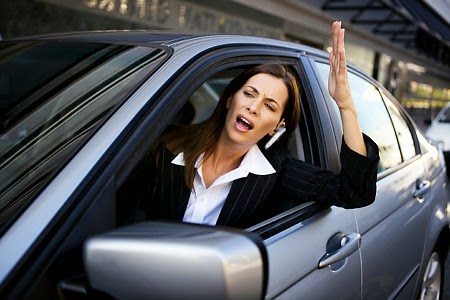 Finally, the light turned green. Still, nothing I could do until the vehicles ahead of me got their acts together and crept forward. And then, all of a sudden, I was able to move.

Prior to accelerating, I engaged my left hand turn signal and slowly proceeded forward. Suddenly, the vehicle behind me honked furiously at me. Seems I wasn't moving fast enough for the driver, but there was nothing much I could do about.

But it wasn't quite that. It appeared, in retrospect, I not only wasn't moving fast enough for the car at my rear, but I had unintentionally pissed her/him off even more as the one turn lane s/he wanted to turn in I was turning in ... slowly. Too slowly, as was the fact of the matter.

The car - with a woman driver I noticed - honked once more as she zipped past my right side, all the while glaring at me. No matter.

As it turned out, I did make that green light ... and, coincidentally, pulled up behind her at the next light. I saw her continuing to glare at me in her rear view mirror.

As it turned out, she was headed in the exact same direction as I was. I tailed her for about another mile before turning in the same driveway as her. I saw her park and shoot lasers at me as I passed. I contemplated waving, but decided I'd "made her day" enough already.

Caught in the traffic of trying to get a parking space, I witnessed her at my rear right side through my mirror; she had not only parked, but made her way toward me by foot in order to snap a picture of my car such that she was able to get my license plate.

Good for her. What she intended on doing with it I had no clue. Kind of a "he said, she said" thing.

But if it pissed her off such that she was not only in a more of a hurry than she already appeared to be (Had I made her late for an appointment?) yet still had enough time stop and snap my picture? Then my job (unintentional though it might have been) was done. It wasn't like I was consciously trying to get in her way or impede her in any manner. Traffic and all that, y'unnerstan' ...

Then again ... some people are just naturally born bonehead drivers and it's all about them when they drive.

In the meantime: This guy? He's making friends (and enemies) wherever he goes.