Because I can, here's today's spread from the L.A. Times on Mickey Rourke. 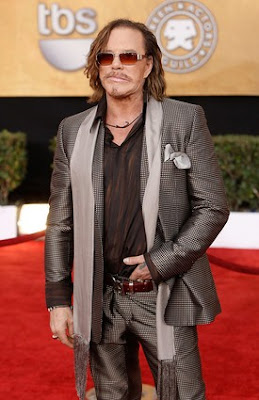 If this year's award season has seemed like an endless parade of trophies for "Slumdog Millionaire" and Kate Winslet, then there has remained one rather tantalizing bit of suspense for dedicated kudo watchers: What will Mickey Rourke wear next?

The actor, working the award circuit in support of his unexpected comeback role in "The Wrestler," had been a sartorial riot of textures and patterns and colors, mixing and matching pieces with a fearlessness paralleled only by his astonishing performance. With his mussy hair, sunglasses and ubiquitous hip-dangling chain, he still evokes the outlaw danger of his biker past, while his penchant for open-necked shirts, unbuttoned cuffs and oversized, slightly undone neckties exudes an air of disheveled elegance. Consider the look something like a luxury hobo or a dandy gone to seed. 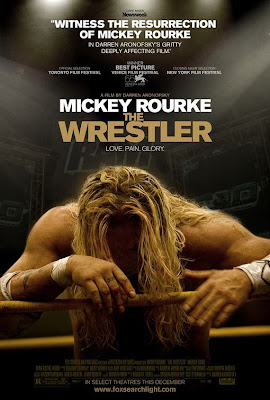 Regardless of the outcome in the lead actor category at the Academy Awards on Sunday night, one of this season's most lasting images will certainly be Rourke onstage following his win at the Golden Globes, draped in a sparkling scarf and shiny lapels, one hand clutching his prize, the other dipped nonchalantly into his waistband.

Assisting Rourke through the hustle of award season for about the last five months has been New York-based stylist Michael Fisher. Where some male celebrities slide through award season in a cloud of nondescript tastefulness -- George Clooney has publicly prided himself on wearing the same tuxedo for years -- Fisher knew going in that Rourke would be taking his look in a much different direction.

"I met with Mickey, and the first thing he said was that he's not George Clooney and he's never going to be George Clooney," Fisher recalled recently over the phone. "He's not going to wear a classic black tuxedo; he's not interested in that.

"Mickey is a personality, and he has his own sense of style. He likes clothes, and he likes expressing himself though clothes. He does it in his acting and he does it in his day-to-day life. Most guys are either going to be safe and, for lack of a better word, boring when it comes to red carpet dressing, just because they don't have the time or interest, or they're just too afraid of criticism. And Mickey's not that. He likes taking the risk, pushing the envelope and being more flashy. And no one else can wear it like Mickey wears it." 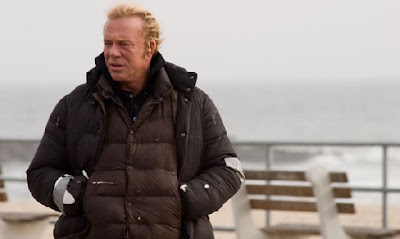 Some may recall Rourke's less glamorous -- and far more quotidian -- boxer-era look of hoodies and workout pants. But these days it's hard to imagine anyone else pulling off Rourke's red carpet attire with quite the same natural ease and élan. (Seriously -- just picture yourself in some of those suits.) Even though some of the clothes come from Europe or relatively exclusive boutiques, most of the pieces are surprisingly available. Anyone could, if they conceivably desired, sport the Mickey Rourke look.

"It's out there," said Fisher, noting that Rourke has been favoring shirts and belts by the line Billionaire Couture and jackets by Dolce & Gabbana. "Mickey kind of gravitates toward Italian designers; they kind of have that machismo, macho aesthetic already there. These looks are out there, you just don't see them translate to everyday life or on celebrities because most guys just don't want to go there, they don't have the guts or the event to wear it."

Despite his newly reformed attitude -- a signal of his humbled return from years in the darker corners of Hollywood and his acceptance of the mantle of rogue elder statesman -- Mickey Rourke is still, of course, Mickey Rourke, and so he remains the final arbiter on what he wears. The same tightrope-walker verve that Rourke brings to his on-screen performance also feeds into his personal style choices. 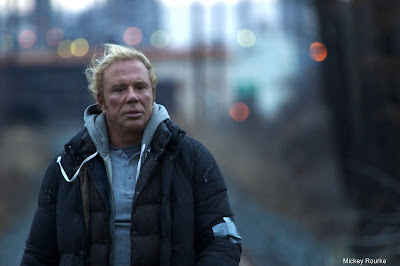 "A lot of the time it comes down to five minutes before he walks out the door he's the one who says, 'I want to wear this tie with this vest, and this scarf and this shoe.' He kind of puts it all together. I just have to make sure all the elements are there," said Fisher. "When I see it all together I do think he's the only one who could pull it off."

One of the most distinctive, and remarked upon, elements of Rourke's outfits throughout the season has been the long chain he usually wears clipped to his belt (nope, it's not attached to a wallet), evocative of the rough-and-tumble biker lifestyle that Rourke has injected into his personal back story. 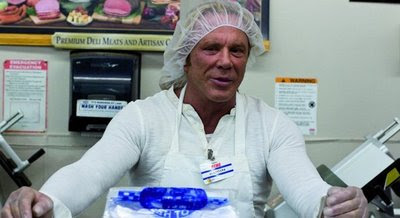 "The chain is his own thing," said Fisher. "It's kind of a good-luck charm. He's had it forever. I was maybe a little apprehensive about the chain on the red carpet, because I associate that with a real street kind of style, not black tie. But he has to be himself, and that's him. I respect that, and at the end of the day it looks good."

Fisher admitted Rourke's Oscar outfit had already been chosen. Though he declines to name a designer, in part to increase the Sunday surprise, he does reveal one fact that may come as little surprise to those who have been looking all season for updates on the Mickey Rourke style file.