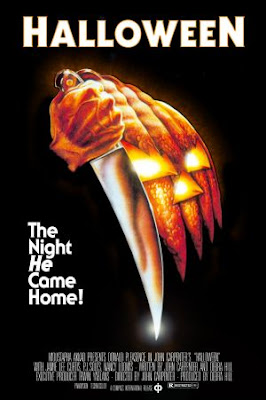 Admittedly, a lot of cool films came out in the 1970s. And especially when I was in high school: Star Wars, Jaws, Alien, Close Encounters Of The Third Kind, Logan's Run, Animal House, Apocalypse Now, Superman, Rocky and, of course, John Carpenter's Halloween.

As teens, we did a lot of movie watching, a majority of it at the Puente Hills Mall in Rowland Heights, California, east of downtown Los Angeles. (It was this same mall where Back To The Future would later be filmed in the mid-1980s.) And, while I'm not completely certain, it was probably at this mall I caught Halloween when it debuted in late October of 1978.

The film (which would eventually establish itself as one of the true horror classics, one which still stands up today) was on the top of our list to see that Halloween season. It was terrifically creepy, it was responsible for initiating my love affair with Jamie Lee Curtis (her first starring role as a matter of fact) and would cement its theme in my head for years to come.

Today, Friday the 13th, Trent Reznor and Atticus Ross of the band Nine Inch Nails have re-imagined the film's main theme. How convenient and how appropriate. I've been a NIN fan from the very start when they released their debut album Pretty Hate Machine back in 1989. Since that time, Reznor (the only constant mainstay of the group in all their incarnations) has released a bevy of NIN records and EPs, won a couple Grammy Awards for his efforts and even managed (along with Ross) to garner an Oscar for Best Original Score for 2010's The Social Network.

So how does NIN's version of the Halloween theme stack up to the original? Pretty well truth be told. It's understandably polished from the 1979 original but with clear reverence to Carpenter's composition without too many added extras. My biggest critique? It's overly long. Clocking in at the better part of eight minutes, it becomes rather tedious around the five minute mark. That's not to say there aren't some nice flourishes, eerie backgrounds and swells that add to the ambiance of the track. But it's a bit of an effort to sit through in its entirety.

Both Carpenter's original along with NIN's update are provided here for your dining and dancing pleasure. Please enjoy as All Hallow's Eve rapidly approaches.