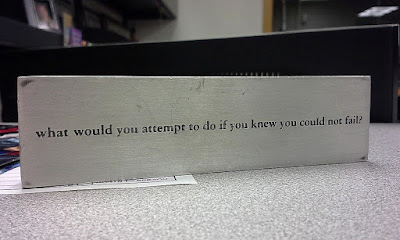 The responses? Have been overwhelming. Of course not a one of them was placed on the post itself but a bevy of'em turned up on on social media, private messages and the like. (Proving conclusively anyone who reads this blog is nuts.) Ergo it will look like I'm answering my own question - something I don't have (and, for ages, haven't ever had) a problem doing.

"What would you attempt to do if you knew you could not fail?"

To me the obvious question to the question is: Why would you "attempt" anything? With the indicated parameter, any attempt would be met with success. There's no room for failure in what is asked, not a hint of it.