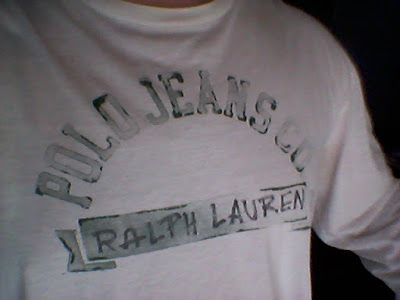 I'm particular about the things I wear, just like anyone else.

Well sir, the person (people) who might say that about me might have a point. But it daunts me not. So I'll revise the above statement with: Sometimes I'm particular, other times I'm not.

Which leads me to today's posting: A clear-cut boast of both Ralph Lauren (who I could give a rat's ass about) and Polo Jeans (of which I do not own a pair and am pretty certain you won't ever see me doing so).

So ... why do I wear this blatant promotional chunk of garb?

Because it's comfortable. Rarely is it worn outside the house - it's mostly donned as an indoor shirt for lying around lazily or as a first-thing-in-the-morning-while-imbibing-morning-coffee kind of shirt.