Some Kind Of Oblivious Über-Genius 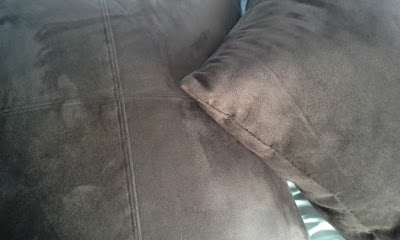 Think about it a minute:

You have a throw pillow that has two different designs, one on each side. The design is nothing more than stitching across the face of one side; the opposite side of the pillow is plain, no stitching whatsoever.

One pillow, two different sides. Got it? Good.

Now, add to the picture the fact there are three pillows all together. All are identical with two different sides as noted.

These throw pillows get put atop a bed when made. Doing a little math, if you were to make the bed and randomly toss the pillows on top of it, what are the odds you would have all three pillows aligned on the side without stitching? You'd have a one in six shot, roughly a 17% chance on any given day.

Now ... let's say you made the bed, oh, 3 times a week over the course of 6 months. You will have made the bed 78 times in that period. Know what your chances are of that stitchless side coming up every single time in those 78 times? Once in the course of four hundred sixty-eight random attempts. Translation: You have about a .0021% chance of this little trifecta coming up in each and every one of those 78 days.

But that's EXACTLY what happened to me! I randomly aligned those pillows with the stitched side away from view each time I made the bed over the course of 78 different scenarios!

Wow! A .0021% chance and I nailed it in every single instance for 6 straight months! I must be some sort of mathematical über-genius or something, right ... ??!!?

... it could simply be I realized just the other day, for the very first time, there are two sides to the pillows ...