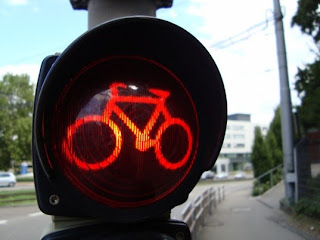 Today? I almost killed a kid.

The light was green and going my way as I approached a four way intersection. I looked right as I entering into the intersection, then I looked left.

I should have looked left first.

Veering around the front of me was a kid flying down the street. His velocity was was uncanny. He was going downhill ... flying. I slammed on my brakes and nearly clipped him at across the right headlight. "What the hell ... ?!??" I yelled out loud.

And then, in my left peripheral vision, I caught movement. It was another kid, flying right at me, directly at me. He slammed his brakes squealing while swooping behind me. In the moment - it appeared as if he was mere inches from hitting me. He motored on behind me, never really stopping and kept speeding down the street.

Stopped partially in the intersection, I gathered my wits, looked to my right and saw them both cruise away. I breathed a sigh of relief I hadn't hit anyone. I accelerated and continued out of the intersection on my way.

And then I thought again: "What the hell?" I motored on up to the next light and got into the left turn lane. I decided I wasn't letting those kids get away with this. I was certain that had I clipped that first one? I would have killed him. He would have been splayed across the concrete in a bloody mess. Backpack askew ... front wheel in an odd and obscene oval ... legs at impossible angles ... unnaturally colored asphalt everywhere.

I zipped through a U-turn as the light turned green and began looking for the bicyclists. I caught them ripping down a street to my right and I turned down it. At another light, I caught up with them.

I rolled down my window.

"Because I just about splattered you all over the road as you ran that red light back there ... that's why ..."

"You're not having me arrested" he replied.

"Both of you! Pull over right there and don't move!" I yelled.

I moved out into the cross street and pulled up to them. They maneuvered 180s and then took off in the opposite direction.

A police officer passed me as they fled and I accelerated up to him. I motioned him to roll down his window: "I just about killed a kid who ran through a red light. Anything you can do?" I asked.

"Was it one of those two kids you were talking to back there?" he asked.

"I'll talk to them ..." the officer acknowledged and swung in their direction.

Another U-turn later I was hoping I'd see the officer with the two kids. I didn't get that satisfaction. But that wasn't the satisfaction I was looking for.

Sure ... it would have been nice to have seen that. But ... honestly? I was just glad I hadn't clocked that boy in light of his bad judgment. It would have made me sick.

In retrospect: I really need to keep my weathered cane in the car so I can wave it at those damned kids ... tell'em to keep off my damned lawn.

In the meantime, I'm content to count my blessings ...