I made a mistake recently.

(Hey ... I'm good at makin'em, you know? One of my pithy little comments has always been "Stick with your strengths." And making mistakes? One of my strengths.)

I was on my way to pick up my daughter from high school. The retrieval system the school has set up leaves much to be desired. Seeing it for the first time, I figured it was just a matter of time before there's a fender bender or five from folks seeking out a parking spot. 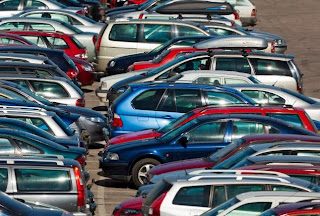 The area in front of the school is a no parking zone except for certain time frames of drop off and pick up during school hours. The pick up time is the more disconcerting of the two. Folks tend to park at a 45°  angle at the curb. Not a bad idea in and of itself - parking space is increased and it's easy to zip in and out of a space ... except ...

The angle people park at is such they back in to spaces from the main thoroughfare; they don't pull directly up to the curb and parallel park. Instead, everyone stops in the middle of the street and backs into a space, creating 45° parking that is easily exited from once their kids are retrieved.

But this creates major stoppages in the middle of the street forcing drivers to be hyper-aware of what the car in front of them is doing ... not to mention making certain you have an eye in the rear view mirror to see what someone behind you might be up to.

In the very few times I've been to the school to do a pick up, I've seen more near misses than I care to mention. They're rampant. A fender bender is just around the corner, waiting to happen at any moment.

It was just yesterday I was hunting out a space in which to park and I needed to jam on my brakes suddenly. Some already nestled up to the curb yahoo wasn't happy with their particular parking job and decided to pull out in front of me without looking to see if there was any oncoming traffic, said oncoming traffic being me. I quickly braked to a stop, waited for the person to do their thing and motored on. As I slowly passed him to toss a dirty look his way, I immediately encountered a car in front of me. Again, I braked. But it was too late to have realized the car in front of me was attempting to grab a spot I was now blocking. I saw the hands of the driver fling up in exasperation. I was immediately and silently apologetic. The driver wasn't going to see me mouth an "I'm sorry" as s/he was too busy trying to find another spot in which to park. Fortunately I noted s/he found one a few spots up. Realizing this (and in the light of having blocked the car's originally proposed spot), I grabbed the one vacated one for my ownself.

Parked, I got out of my car to make nice with the person I'd flummoxed and to apologize face to face for being rude ... albeit inadvertently. I walked up to the person's car and noted it was a woman. I came around to her driver's side and tapped the window, startling her somewhat. She was on her cell phone texting or viewing something. She rolled the window down.

"I just wanted to apologize for nabbing your parking space back there. Maneuvering this place is trial of nerves ..."

She looked at me wide-eyed. "You came all the way over here to apologize for that?" she asked incredulously, but with a little smile on her face. "Who does that?"

"I do that. There are still a few good people in the world wading through all the boneheads," I told her. "Anyway ... I just wanted to say I was sorry. I didn't mean to appear the jerkwad."

"Thank you!" she stammered and I walked away.

After having practically killed a kid a bit earlier in the day, it was good to right a minor wrong and put a little balance back in the world, miniscule though it might be.

Email ThisBlogThis!Share to TwitterShare to FacebookShare to Pinterest
Labels: Back To School, jerkwad, parking, School