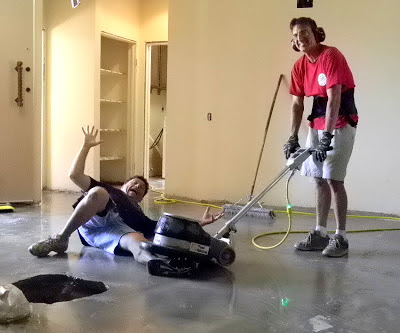 If we had gone with the tile "chipper" (as I christened it), floor prep would have taken 10 days. (Side Note: Pulling it out of the trunk and having the blade gouged into my leg, however, you'd have thought the thing would perform flawlessly. Alas ...)

The "chipper" was painfully slow. It did ground down the residual thinset and adhesive left behind from the previous tile but, at the rate it was going, you could feel yourself actually age as it continuously vibrated. (After 15 minutes of working with the contraption you could feel your bowels turning to jelly.)

Something had to be done.

"Maybe we should replace the blade. I did get a brand new one ..." Steve mentioned. He handed me a brand new, hermetically sealed package. Not having operated this particular machine previously and knowing virtually nothing about it, I scanned the blade package to see how it was supposed to be installed. That's when I noticed a discrepancy.

"Steve ... the blade isn't attached correctly - it's upside down. No wonder it's taking forever to remove the debris."

"That's the way it came from the store. It has to be in right."

"It's in right, yes ... but not for our purposes," I explained. A couple minute discussion ensued. He was finally convinced. I repositioned the blade and we activated the machine once again. Amazingly, the tile residue came up 10 times faster than before. But ... again, at the rate it was being chipped at, it still would have taken a week to do the job properly.

So, at just before 6:00 a.m. Saturday morning it was off to Home Depot the next morning to rent a "massive removal machine" (henceforth to be called by Steve "MRM" ... but, really, it wasn't massive at all) as Steve referred to the alternate rental. It was nothing more than a huge diamond-bladed buffer capable of extracting just about  anything in its vicinity - tile residue, various floor aberrations, limbs, etc.

Fast forward 45 minutes later. Steve is at the controls of the MRM first. I felt the need to caution him - he's not the biggest guy in the world, after all: "Uh ... Steve? The instructions state you need to engage this piece of equipment from a flat surface ..."

"That's what were trying to accomplish: A flat surface. I'll be fine ..." Famous last words. Both handles were engaged and the safety switch was flicked. Not 1.5 seconds later, the MRM had bucked and kicked Steve against the was and threw him clear as it stopped dead in its tracks, almost toppling sideways, automatically shutting itself of as the handles were let go. And just in time - it came dangerously close to ripping the electrical cord feeding it in two  Good thing that particular fail-safe was built in ... for the cords sake and for Steve's.

Slightly dazed from being thrown clear of the machine and into the wall, Steve yelled:

"I'm sure there's a learning curve," I commented. "We just have to get used to it. Let me try." I dragged it to a flat spot on the floor without saying anything (the instructions weren't written to be pooh-pooh'd - there had to be some semblance of intelligence behind them - and I braced myself before flipping the switch.

I was slightly more successful. 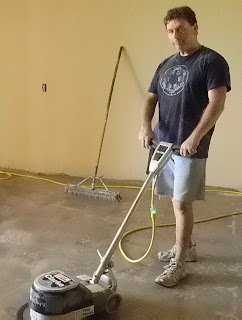 I fought the machine into submission and got the hang of it, no easy feat. At first, it was like trying to wrestle a full-grown pitbull into submission, one who didn't want to be confined. I realized flat surfaces were your friend with the thing - you have to ease into any floor aberrations you want rid of. Ever so slightly tip the machine to your left, it veers left. To the right, it goes right. Steve watched me struggle through my efforts to control the thing for a full 5 minutes. I stopped it and took in the experience. You had to finesse it, work with it. There was an absolute method to the madness in running the MRM. Go against its grain or try and coax it into something it didn't want to do and it was going to bite you in the ass. Or take your foot off in the process.

To add an element of danger and intrigue to the process (you know ... for shits and giggles) it was necessary to continuously feed water to its blades, not only keep them lubricated while it was grinding away but to keep the beast from overheating and shutting down. Yeah. Let's operate the thing while on a slippery floor. Because it's not only dangerous in and of itself, we need something else to continuously concentrate on as well.

With half an hour each on the MRM, I'm pleased to relate we both mastered it. 6 hours later, exhausted and covered in thinset silt, we were still whole of body, a little deafer and could proudly slap each other on the back at the polished floor we muscled clean, ready to be wet down, mopped up and now able to accommodate new tile.