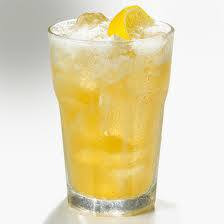 We went to dinner in downtown Palm Springs Thursday evening. We deserved it after a long week and headed into a Friday with two more days of blood, sweat and tears to get through. Besides, the weekly street faire was in full bloom. Off we ventured.

Dinner, as it turned out, wound up at Las Casuelas Mexican Restaurant, a rather fine establishment. We'd visited the companion locale in Rancho Mirage a few weeks prior (tasty margaritas!) and knew we were again in for a treat.

Understand: It was a day before becoming what I'll refer to as "Africa hot"* in the desert. The weather that evening was almost to the point of oppressive - 108° and no breeze. But it was pleasant outdoors so long as you were in the shade. And there was no humidity. Bonus: Water misters schpritz you from passing businesses and eateries as you walked along the boulevard.

Our waiter came to take our drink order. It was margaritas for everyone ... except me. I felt the need for something different. With the weather being as balmy as it was, I felt a Lynchburg Lemonade to be the perfect refresher. (My repast turned out to be broiled fish tacos, by the way. Because I know you needed to know ...)

"Margarita as well, sir?" our waiter asked in a rather thick Spanish accent as he took my order last.

"No. I'll have a Lynchburg Lemonade, please," I responded.

My dinner mates almost guffawed at me. "You realize you're in a Mexican restaurant, right? They probably don't have any idea what that is. *I* don't know what it is!" one friend told me.

"I have a good feeling I will be accommodated," I said. "A Lynchburg Lemonade" I repeated to the waiter.

"No. A Lynchburg Lemonade."

"Michael ... seriously: No one in the history of this restaurant has *ever* ordered a Lynchburg Lemonade before," another friend surmised.

"A 'leechburr lemonade' ... I don't think we have that ..." the waiter said with his face screwed up in doubt.

"Oh, you have it. And, if you don't, I'm sure the bartender is sharp as a tack and can figure it out."

"Spell the drink for me, please sir?" he asked. I spelled it out.

The confidence "exuded" by the waiter was a bit troubling, I'll admit. If it would have been *me* waiting the table and taking the order, I would have expressed a certainty to my customer the order would be fulfilled ... whether it could have been or otherwise. If I found it wasn't possible to do so, I would have crossed that bridge when I'd've come to it. Customer satisfaction, y'unnerstan' ...

10 minutes later, our drinks arrived. I was the last to be served.

"Here's your special drink, señor," our waiter noted as he passed me what looked to be an authentic Lynchburg Lemonade.

"Thank you," I said as I accepted the decorative glass with the lemon slice and green straw.

I tasted it while everyone watched me. I was shocked ...

Shocked at how tasty and mouth-burstingly refreshing it was. The bartender hit the nail on the head. And s/he didn't hold back on the alcohol either, a little added bonus.

At the end of the meal, I made certain the waiter knew the drink was exactly what I had ordered and that I'd enjoyed it. I asked he compliment the bartender.