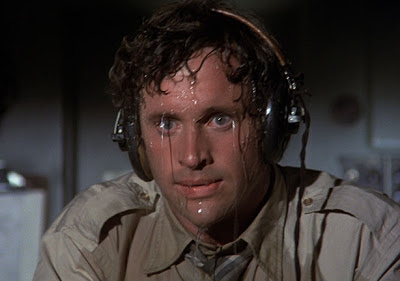 When Steve purchased his condo in Indian Wells, little did he know it came with a sauna ...

The condo's garage is insanely hot. Steaming. Roasting. Come the afternoon, it's its own hot box ready to serve the needs of every sweat gland contained within a human body. Want to rid those toxins from that burrito you ate the night before? No problem. Spend 10 minutes in the garage.

"Michael: Mind coming coming with me to the garage to help me put up some lights for a few minutes?" Steve asked me this particular afternoon around 2-ish.

"Give me a minute, I'll be right there," I replied. I thought I was safe. The dreaded three o'clock hour hadn't yet turned over, when the garage was hitting the upper reaches of temperature. It should still be tolerable for a human to withstand its atmosphere for more than a handful of minutes I figured. (Little did I know.) Plus, truth be told, it hasn't taken Steve 10 minutes or less to do anything in the garage in the last 3 weeks we've been here. So I was fooling myself in believing we were going to be in and out of them before we were puddles.

43 minutes after we'd first ventured into the place, both of us were still in the rafters, T-shirts completely soaked with sweat, face dripping as if we'd just come out of a pool. And we still weren't done. That's when the comedy came ...

"Let me see if you have any anchor screws or molly bolts or something. Then we can stop fooling around with looking for a stud, being it appears your stud finder has a mind of its own as to what a stud actually is ..."

Minutes later with several anchor screws in hand, I climbed back up the ladder next to Steve's, slipping in the process as I mounted the steps. My hand hold wasn't the best - there was a sheen of moisture in my palm, but I managed to catch myself. I handed him an anchor screw. We re-positioned the final light bar on the ceiling, but, before he could screw it in properly, he slipped and gouged the flesh between his third and forth knuckles on the side of the fixture, imprinting a deep gash between his knuckles and drawing quite a bit of blood. Neither of us winced, neither of us reacted in any way. We just looked at the wound.

"You know ... I should be crying right now but there's no moisture left in my body. My tear ducts are vacant of tears ... dry as a bone ..."