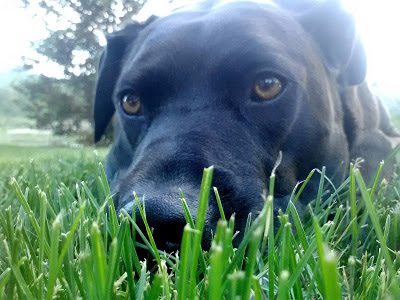 The word came down: It was time the girls had a dog.

"Big responsibility. Lots of work. It's been a while since I owned a dog. You sure?"

And then, I was off to the Pasadena Humane Society. We felt a rescue was the best place to discover a pet.

The two dogs I was supposed to look at weren't there. They were gone. 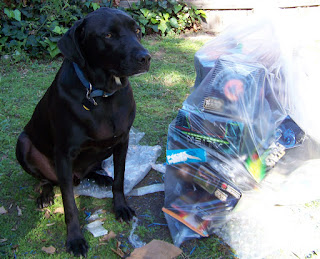 I searched and couldn't find him, but on a second go around I finally saw a sign with a picture of a black lab mix. About 5 to 7 months of age was the best guesstimate they could make. On the cage door was a neon pink placard with black lettering on it:

"Approach Slowly"
"Really? This is the one you want me to take a look at?" I asked.

I got hold of an attendant and asked if I could arrange a meeting with "Mr. Approach Slowly." One let me in and went to the back of the cage where the pooch was lying in wait. As he brought the dog to me, the pooch looked me up and down as he approached (growling lowly and almost menacingly) and finally stuck his snout in my hand. I took 10 minutes to get to know him. He was wary, but appeared to gain confidence and eased up as the minutes passed.

"Let's get everyone together, come down and meet him. Best way to see if he's right for us."

And we did. In the "social area" where prospective owners familiarize themselves with possible companions, he was aloof and didn't want anything to do with anyone, really. 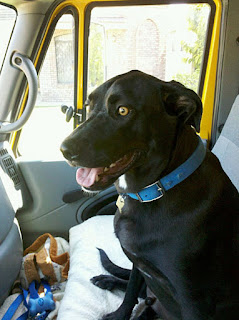 He was more interested in exploring the grounds and discovering what each and every bush was about. The people in the place who'd come to see him? Pish, posh. He didn't have time for them, but he kept on looking at eveyone as he scampered to and fro, growling at anyone who got too close.

"They say he was abandoned, no socialization. Natural reaction from him. That will ease with time and familiarity." (Note: It never really did.)

Almost 12 minutes in and he'd barely bothered to make time for anyone. He would go up and sniff at a pant leg or an outreached hand, growl at it, then scamper off to snort more shrubbery.

The dog wandered around the entire time and I stayed with the girls to make certain there were no unexpected problems - it was obvious he wasn't going to yip or snap at them or at anyone for that matter. He had his own agenda we didn't quite realize. I finally strolled to a bench and sat down to see if that might ease his hyper-aware sensibilities and make him feel more at ease.

Surprisingly as he watched me sit, he jumped up on the bench startling me and laid his head in my lap. I looked up. 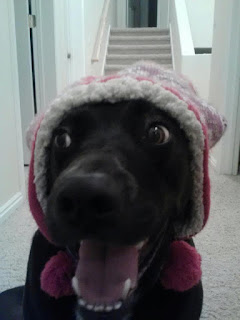 It was decided, paperwork was filled out and we could pick him up in a few days after his shots and other necessaries.

Names were bandied about in droves. Riley was on a "Rocky" kick at the time and wanted to tag him with every single character in the film. My suggestion was finally the one that stuck after giving it a test run for a week.

We trained him to be a house dog and he grew accustomed to that standing rather quickly. In attempting to acclimate him to off-the-leash freedom, he ran across the street one Saturday afternoon to chase down a cat and promptly got bumped and tossed by an oncoming car. (Fortunately, that's all it was - a bump to his side that scared everyone for a moment ... including him. The poor driver had a conniption fit.) But he eventually learned to stay put ... for the most part.

He loved chasing the squirrels in the backyard that leapt about in the avocado tree. He adored his chew toys and car rides. He was taught various tricks and spoke to us often when we came home, relaying the lowdown of his day in plain canine. And, oh ... how he used to love to wrestle and cavort.

He was a valued member of the family and I couldn't have asked for a better dog. That growl of his, menacing as it was to just about anyone he met, was nothing more than his trademark. He never bit anyone, but he did give an elderly gentleman walking in the street a virtual heart attack one day and he "menaced" many a child with that growl. I used to put my head against his when he was lying down and he would snarl, letting me know I was invading his space. (Secretly, he loved the attention.) 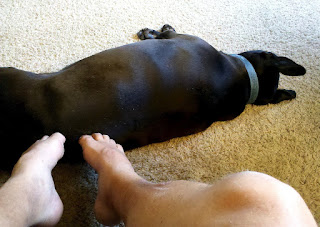 He loved BBQ and he loved his noon string cheese snacks. He was a canine vacuum when it came to food. Imposing as he appeared at times, he was a big weenie when it came to the snow, gingerly tip-toeing through it when he was let out. He made most things his business and protected us from the UPS man, voles and cats and other dogs and moose and skunks possessively. (Of the last two, he got the shit kicked out of him twice by a couple moose he was menacing who were on our property - he was just protecting the household, you couldn't blame him - and he once went on a run of 3 separate skunk sprayings within a 10 day period. Oh, the joy of those two weeks ...)

He even had a theme song: "Black Dog" by Dread Zeppelin:


A couple vet visits revealed Bob was riddled with problems common to labrador retrievers along with some other anomalies, things no amount of money could repair. So, before he gets worse, at the suggestion of a very understanding vet and with much regret, it's time to let him go.

Bob The Dog is going to be sorely missed.