I've harped on this before along with my refusal to use them ... or at least minimize their use in my everyday language. 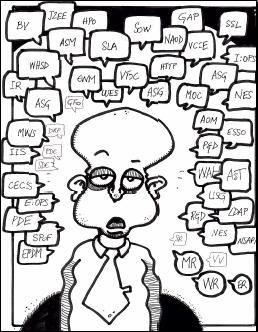 It's a matter of conformity: Someone "says" something, acronymically speaking, where I'm forced (if I want to understand) to look up the abbreviation. (And I'll admit: This little rant was brought on by my buddy Ivey who used "TIL" this morning ... which I immediately had to go look up, not having any point of reference.)

So I'm going to start my own AM&CS** which everyone - EVERYONE - is going to have to follow ... adapt to ... deal with. After all, if I have to play the game, then they're going to have to roll with the punches as well. There are two sides of the fence with theirs being TDDoA***, TFDoWC**** ... and their side is not the only one that's going to get the spotlight. Not on my watch.

I'm going to shorten words and phrases that make sense to me. Anyone who reads what I have to say is just going to have to be all the wiser.

I feel empowered! Strong! As if I'm on a 10' tall soapbox, prosyletizing to the masses!

But ... you know what? Thinking about it, implementing something like that is just going to be too much work. So, instead, I'll simply keep doing what I'm doing: When someone spews some compressed, abridged something-or-other I don't understand, I'll just say "I don't understand. What do you mean?" BeyeNo***** that pushes buttons.

Email ThisBlogThis!Share to TwitterShare to FacebookShare to Pinterest
Labels: Acronyms, Clark Brooks, Ivey West, The Acronym Marching and Chowder Society, The Decline Of Western Civilization, The Dumbing Down Of America