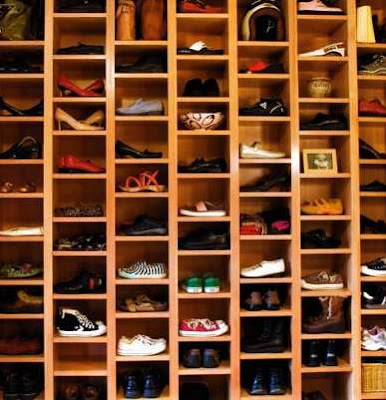 I have a shoe problem.

Yes. I have a shoe problem.

It manifested itself over the weekend. And it became necessary for me to give in to it. Yes. I purchased a pair of shoes. (Well … technically my wife did. It was she who actually conducted the transaction. So that really wasn’t a problem.)

We’ll have to vault back to a time ... many, many years ago when there was actually a Mervyn’s department store … before they went out of business. Because that was the last time I purchased a pair of shoes. (And, if memory serves, that too was a transaction conducted by my wife.)

I was ambling about in the shoe section while my patient spouse was failing in her attempt to get our daughter to settle on any pair of shoes to wear (an ongoing dilemma to this day).

Aimlessly wandering about, I happened upon a clearance rack. There, at eye level, was a black box. I don’t recall the name on the box, but something caught my eye. It was an oval sticker claiming “85% off”. I scanned the box for the original sticker price. Finding it, it claimed the shoes were $95.00. I quickly did the math: At 85% off, they would ring up at a mere $14.25. I decided to get them. Where else was I going to find a pair of spiffy dress shoes for $14.25?

Heading to the register, they were scanned. They came up something completely and totally different than the $14.25 figure I had come up with in my head.

“Are you certain?” I inquired of the sales lady assisting me. She was certain.

Years went by. And the problem continued to be just that. A problem seemingly without end.

That was … until this past weekend.

The wife was tending to the girls and they're inability to decide on shoes for school. She seemed a bit frustrated, so I stayed away and let her deal with them. In this case, misery does not love company, I thought.

And then, suddenly, another black box before me.

Could my fortune of those many years ago be re-manifesting itself once more? Would I get up to the check out register and have the box scanned by a helpful associate only to find that $16.00 price was naught?

You see … I have a shoe problem.

I hunt for the elusive single-dollar pair of dress shoes …

Email ThisBlogThis!Share to TwitterShare to FacebookShare to Pinterest
Labels: Eight Is Not Enough, Problem, Problem Shoes, Shoe Problem, Shoes, Too Little Too Late