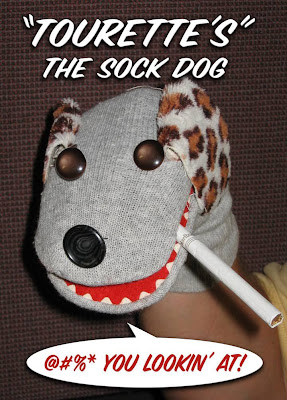 His hair is coiffed all nice 'n' stuff.

He has an odd, yet pleasant, sense of humor which compliments Rupe's demeanor in the office and we often bounce our wits off'n each other.

Yeppers. "Tommy T" (his name has been changed so his cable company doesn't recognize he is the subject of this blog) is a Tourette's sufferer. Or so he claims.

Rupe has the tendency to believe this, as Tommy does exhibit certain signs of Tourette's.

The thing is, it's not a problem. Not one whit.

Tommy even proclaimed on Day One of his employment he had Tourette's. But not the derogatory, ostentatious kind of Tourette's. And not the facial tic, must-scratch-that-itch sort of Tourette's.

Tommy T's Tourette's is a lot more fun and lighthearted. He goes so far as to make fun of his ownself because of it, matter'n fact.

Example: Sitting at his computer, when something goes amiss, his response is usually a hearty "Eat it!" Why? No one is certain. But it's a frustration thing, exhibited when a program command doesn't go his way or somesuch. You can't help but chuckle at it.

And Rupe goes a bit further. Every time Rupe hears Tommy T cough out an "Eat it!", Rupe starts humming Michael Jackson's "Beat It". It works in a strange sort of complimentary way. And Tommy T gets a kick out of it as well.

Other signs of Tommy T's Tourette's exhibit themselves in his need to sing abstract, out-of-context song lyrics. This thrills Rupe to no end. 'Cause Rupe's all about the music, so Rupe doesn't mind this in the least.

Matter'n fact, Rupe works those lyrics into guesses of what Tommy's singing snippets of. And Tommy, well ... he's often amazed at the answers Rupe comes up with. Many times, Tommy knows not what he's singing and Rupe'll inform him of such. "Really?!?" Tommy will query. "I didn't even know I knew that song!" he'll exclaim.

Yes, there is the occasional sharp "Birdbath!" that Tommy almost shouts out, making everyone turn in his direction. So there is a bit of blurtiness that ensues. But, when Tommy himself laughs at his exclamations, you know all is right with the world.

Once, while in a meeting with the boss down the hall, Rupe and boss heard Tommy shout out a string of incoherencies that were so comical Rupe's boss was practically doubled over on the floor with laughter. "Do you have a problem sitting next to Tommy?" he asked after his laughter had died down a bit.

"Nah. Tommy's fine. It's not a problem," Rupe replied. "Though, you may want to tighten up the observational analysis portion of your interview process next time around," Rupe jokingly suggested. Rupe's boss chuckled and shook his head knowingly.