A Little Bit Over 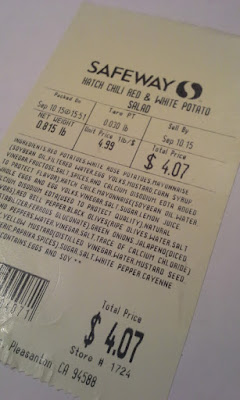 A small spoonful more vegetables at dinner? A top off of wine? A quarter screw-turn more on a bolt?

All depends on the circumstances.

I ventured into the grocery store recently on a quick stop at the deli to see if there was anything to catch my eye for a good side dish for my on-the-fly dinner at work. A red and white potato salad with hatch chilis sounded different and I asked the girl behind the counter for half a pound. I knew I had about $3.00 in my pocket so at $4.99 a pound that worked out perfectly.

Glopping the salad in a container atop a scale, she announced the amount was "a bit over ... is that okay?" I told her no problem and was handed my purchase.

I discovered at check out, however, that "little bit over" came to $4.05. Wait ... what? I was under the impression the amount of overage, the "little bit," would be miniscule, not in fact (and I did a quick mental calculation) more than 60% of that requested.

That was a big difference. .815 pounds is not "a little bit more" than half a pound. And when you're not exactly certain how much cash you have in your pocket and you unexpectedly have to fork over $4.00+ instead of the $2.50 you had planned on paying well ... that's rather the jump.

Luckily I was able to make up the difference in the pocket change I had on me so no harm, no foul.

In that scenario, a stink would have been raised.

But not over a buck fifty for potato salad. A buck fifty it just so happened I had, fortunately.

The potato salad was delicious, by the way ...