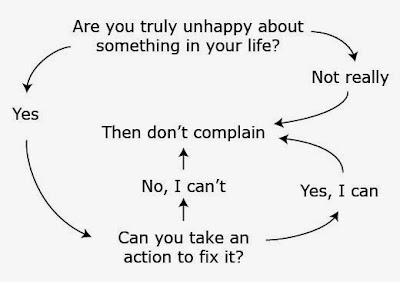 It's something I've come across often.

People who seem normal ... outgoing ... sociable. In general, they are pleasant to be around.

But some? They turn (and quickly) into whining, annoying, self-absorbed crybabies focused on the most miniscule of infractions.

I'm not talking about verbal body tackles to their person. Or snide remarks tossed their way debasing their characters. Nor am I talking about sarcastic one upsmanship. I speak of whining for whining's sake. You know them: It appears they have nothing better to do than complain about the smallest thing.

I'm sure they think they have a reason for it. But in reality it's simply for their justifications.

Or it's because the person is truly self-absorbed and believes they're entitled.

Or they're happy in their misery and uncomfortable when removed from it - they know the feeling too well and don't like when they're not inside that bubble.

Hey, I complain. I complain all the time. You've been to this blog before ... you've seen me do it. When I do it's with a comedic bent. Or with an incredulous "I had no idea." There are several other categories when I grouse, too ...

... but I don't do it just to do it. I don't do it simply for the sake of whining. It's not because I know whining intimately and it's my natural state of being.

Quite the opposite: I'm a happy-go-lucky sort of guy. I'm mirthful and upbeat and I enjoy smiling. A lot. It's too much trouble to be unhappy. It takes too many muscles to frown. It makes for an unpleasant air when I'm around whiny, unhappy people.

I'm not stupid or ignorant of such, though. All situations and conditions cannot be joyous or pleasant.

But why in the world would you force such a state on yourself? When there is absolutely no need to do so? To hear yourself complain? To moan and foster that "woe is me" attitude ever forward?