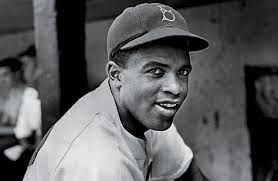 April 15th, 1947. Opening Day for the Brooklyn Dodgers and the start of the first season for Jackie Robinson in the major leagues breaking baseball's color barrier.

Additionally it's the 5th annual commemoration of Jackie Robinson Day where - over the next few days - all major leaguers wear the number "42" on their jerseys among other festivities.


"My first thought was 'Can he help us win the pennant?' I didn't care about the color of his skin ..."

"I do not care if the guy is yellow or black or if he has stripes like a fuckin' zebra. I'm the manager of this team and I say he plays."

"I still don't think people understand how much it plays into the Martin Luther King situation. The revolution that occurred at that particular moment, it mattered. That had to happen first to set that whole thing up. So when you're talking about Jackie Robinson, I don't think people realize the significance and really courage that went behind that, and in the movie it points that out - the courage to not fight back, to be able to win over that particular mind set to be able to make all of this work."