Dad Of The Year


I think I'm in the running for Dad Of The Year. I'll let you decide.

I volunteered to help chaperone my daughter's school trip to see the world's single largest collection of mummies from around the world. Salt Lake City's "The Leonardo" museum was hosting "Mummies Of The World." A busload of students had been unloaded, tagged, instructed and more on what to expect and how to conduct themselves.

But first, one of the museum docents was giving everyone a little history lesson on "The Leonardo" as a primer:

"Does anyone know who 'The Leonardo' was named after?" She chose a raised hand from the 50 students anxiously shuffling their feet, waiting to get on with the show.

"Correct. And what was Leonardo famous for? What did he do?" she asked and, again, began pointing at raised hands.

"He made that guy out of rock."

"Didn't he dream up the first helicopter?"

I decided to raise my hand:

"Are you sure it was that Leonardo? Not one of the Teenage Mutant Ninja Turtles ... ???"

The kids all turned and looked at me. The teacher who organized the museum run stared my way. 2 additional teachers along for the ride and 5 other adult volunteers gaped at me as well.

Crickets. All you could here were crickets.

~ ~ ~ ~ ~
That same day - the day of the museum tour - my other daughter shot me a text around noontime from her school:

"Thanks Dad" it said. It was accompanied with the following photo: 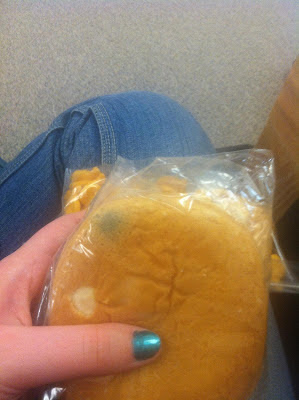 "It was made with love!" I replied.

"Yeah kinda." I could read the sarcasm between the lines. "I didn't eat it, sorry."