Life Among The Dead 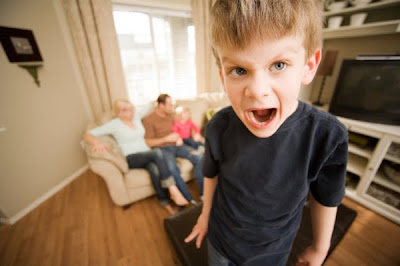 I was at the L.A. County Fair Labor Day.

Admission was a buck ... the weather was gearing up to be picture perfect ... smokey meats and frolickous noise would be wafting in the air ... people everywhere. What's not to like?

I did the things I like to do at the Fair all by my lonesome. It's rather refreshing getting that opportunity. No needs, no hurrys, no unexpected restroom breaks, no doing what you don't want to do. Just the solitude of indulging in your very own whims. Toward the end of the day, with seven hours under my belt, I thought it was about time to call it quits. I was still pleasantly satisfied at the smoked turkey leg I'd purchased hours earlier, my feet were beginning to get tired and it was beginning to get overly crowded with late afternoon revelers wanting nothing more than to go on carnival rides. But, finding myself passing the grandstands, I eyed an attraction: Our Body: The Universe Within. This was an exhibit I'd passed up in Vegas one year and missed somewhere else another ... but I saw here the chance to finally catch it and in a relaxed atmosphere no less. With the late afternoon sun beating down on everyone milling about at the Fair, this seemed like the perfect opportunity for physical as well as mental refreshment. (I mean, it had to be air-conditioned inside with all those plasticized bodies, right?)

Let it be said the exhibit was fascinating ... strange ... a bit weird ... brilliantly educational. It was a kick to see everyday average Joes and Josephines gawking in wonder at the exhibits, sometimes screwing up their faces in such manners as to be comical.

Questions by kids were directed at their parents. Boyfriends asked their girlfriends if this wasn't the coolest thing they'd ever seen. Old men and old ladies standing with their hands behind their backs contemplating the human form with steely intensity. Everyone gazed at lucite-encased exhibits of the hands and feet, then looked at their own, marveling at all the tendons within that moved their extremities in the unique and myriad ways they do. 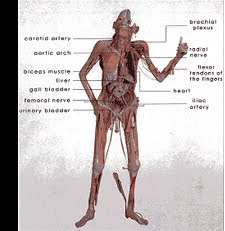 For the most part, everyone was relatively quiet and respectful. There was an overall drone in the place; queries and oohs and aahs, even a few eeews and chuckles.

Relatively quiet, that is, until I got over to one particular exhibit showing a man in motion with muscle stripped away and hanging off his bones to show structure and relative positioning.

Each exhibit in the place was accompanied by a signpost that detailed various body parts and structures being showcased. At this particular model of the man with the dangling musculature, there was a rambunctious 4 year-old inside the roped off area around the display, merrily playing a self-absorbed game of Ring Around The Rosy with the pole holding the sign, gleefully screaming his head off. His parents - a young mother with a baby in her arms, a young father with another in his and several other kids milling about (no clue if they were theirs or not) - did nothing to corral the little boy.

I was right there when a fracas broke out. And it all happened in a span of 10 seconds: I saw the signpost begin to sway until it was at a point where it was coming dangerously close to banging against the plasticized man. I had half a mind to grab the little Buster Brown by his Buster Browns, but was patiently waiting for the parents to say or do something ... anything. Just then, a commotion behind me: a uniformed security guard rushed in and yelled at the kid. She saw, as I did, that the sign was perilously close to gouging the exhibit's head. As she climbed between the ropes to nab the child, the mother finally said something:

"Timothy ... don't do that. Come out here." The guard grabbed him by the shoulder; the mother hadn't moved an inch. "There's no need for that ma'am ... I'll take care of him." But ... she remained there while little Timmy ducked and dodged out of the way of the guard. The father just looked on in boredom.

Timmy finally escaped to his mother's side, a bit frightened by the guard who was stopping the sign from swaying. The mother yelled at the guard: "I said I would handle it!"

Words were then exchanged between the two. The mother walked off in a huff, Timmy in one hand, the other child still cradled in her arm. The father motioned the remainder of the children onward.

The guard, flabbergasted and out of breath, glared as the group retreated into another part of the room. She didn't take her eyes off them the remainder of the time they were in the place.

I continued my examination of the plasticized man on display ... and I could have sworn I saw him sigh in relief as little Timmy walked off.