Bird Is The Word 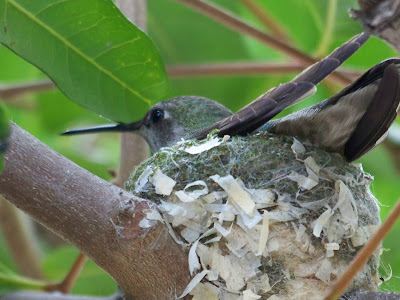 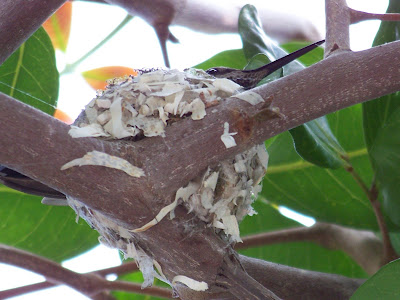 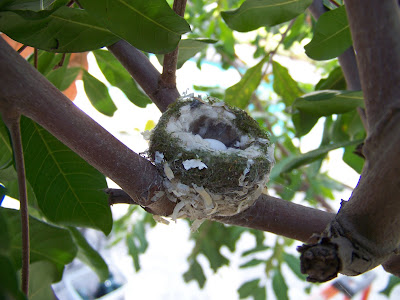 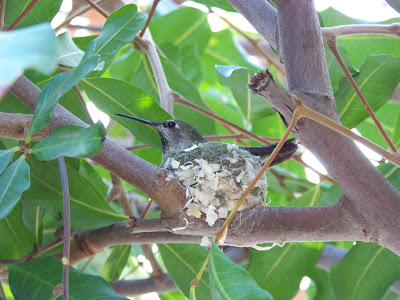 If you really want to be in awe of this creature and its nest,
click on the photos to enlarge .....
It started with our arrival Sunday afternoon. Word had it there was a luncheon being played out by several of the decorating staff in a client’s backyard, at poolside no less.

Upon turning the corner, three women and the client were gazing upward at a lighted tree, pointing.

One of the women – “the boss” – acknowledged my arrival and pointed out the fact I was to be extra careful de-lighting the tree of subject as a mother hummingbird was sitting in a nest above, obviously guarding her stash of eggs. I affirmed I would.

She turned to the client and informed him that even after the baby birds were born and flew the coop "... do not remove the nest. It will be reused by her several times over." (This is true.)

Come the next morning, it was "to the branches". I carefully scaled a ladder and stayed as far away from the mothering bird as I could. Luckily, no lights were in her immediate vicinity; but still, some were close enough where I couldn’t avoid disturbing Mom in some way, shape or form.

Sure enough, as I came within seven feet, the purring, furious beat of tiny wings took to air. I could hear her annoyed chirping as she flew away. I took the opportunity to flick a few shots ... and even managed to get a peek inside where I witnessed at least one egg in waiting.

There was no attack. No dive-bombing. No yelping bird hovering and worrying herself to a tizzy as I was invading her space. Each time I moved the ladder to detach lights, she came back to eye the nest’s contents, satisfiedly setting alight once more atop her precious cargo.

You have to love Mother Nature and the (sometimes rare) opportunity to get up close and personal with her.