A family trip to Boondocks was in order while we were vacationing in Utah.

Grandma and the kids had been previously ... but Mom and Dad? Never.

Miniature golf (two rounds!), wet and wild bumper boats that squirt like nobody's business (the MIL went nuts on these), batting cages, laser tag (I was "Darth Maul" and - despite the fact I didn't even know if I was hitting anyone - ended up getting high score for the session), go-karts and not-only-reasonable-but-decent-tasting food were the orders of the day.

But, the Arcade was where the real action was. Games galore. Ticket-spewing, token-hungry machines beckoning us at every turn. Proffering their coveted yellow tickets to be exchanged for trinkets and jetsam.

And deep in the bowels of the Arcade was an intriguing piece of technology that whispered siren songs and called to me. It sang a sweet tune I found irresistible.

The MaxFlight
FS 2000 Flight Simulator.
How could I refuse?

Sixteen different programs to choose from. Everything from Coney Island wooden rollercoasters to real-time, controllable fighter craft, watercraft and more. Sixteen adventures ranging in excitement from just over a minute to just under five. More than a dozen thrill-seeking tours, some of which featured multiple, multiple, multiple barrel rolls and other teeth-jarring frolickry, all from the comfort of an enclosed cocoon pod run by state-of-the-art hydraulics.

Again: How could I possibly refuse?

I told Wife of Rupe I was headed that way. "Are you sure you should do that?" she queried.

"Where was the harm?" I thought to myself.

I tried to get the eldest to come with me, but she refused. She's not the thrill seeker (yet) that her father is.

I whisked pages several times over within the three ring binder that sat on the podium detailing the instructions and rides one could program into this contraption. I finally choose a bobsled simulation boasting no less than nine separate inversions.

While in line, I spoke with my daughter. "Cool! Check it out - you can see the program I will be doing up there on the television monitor! Go get mom and tell her to come watch!" She ran off in search of her before the ride commenced.

Finally, it was my turn at bat. The woman manning the ride asked if I had chosen a program. I told her. I barreled through the turnstile and entered into the contraption. Shoulder straps where applied. A crotch strap manhandled me. A seatbelt was the final restraint clicked into place. The top half closed around me, encasing me within a claustrophobic air pocket complete with PVC tubing blowing cool air at my face, a blank, white video screen in my purview.

60 seconds went by wherein I heard the snap of a latch and the engagement of additional exterior restraints that would prevent my new temporary home from inadvertently flying open while I was hanging upside down.

I barely heard a keyboard click to my left - the woman pecking in the program of my choice - and of a sudden my restraints pulled at me as I was lifted into the air. A jarring halt had me waiting in anticipation as my heart thumped faster in my chest.

Another 30 seconds or so passed as I eagerly watched the screen in front of me, waiting for the program to initiate. Instead, I heard a hydraulic squeal and I was unceremoniously tossed 90 degrees onto my left side. I was vertical ... the fun was about to begin ... !!!

There I was ..... still vertical after three minutes.

No noise. No action. No movement. No video image in front of me. No sound.

From outside, I heard the woman conducting the ride finger her walkie-talkie. "Frankie ... I have a problem over here ..... have you got a minute?"

I felt movement as two females were obviously trying to lift the contraption off its side with me in it. For whatever reason, they obviously couldn't get the simulator to right itself. I had no idea why.

"Frankie ... we still need help. We're going to have to get a lot more bodies over here to get this guy out ..."

All said and done, it took them close to eight minutes from the time the simulation "began" to extract me from the contraption. Once righted (and with lots of effort on their part, I was told), I heard the exterior restraints come off and the latch unsnap. Then there was light as the clamshell top opened to reveal several attendants looking at me in wide-eyed wonder.

I shot my arms in the air and yelled at the top of my lungs: 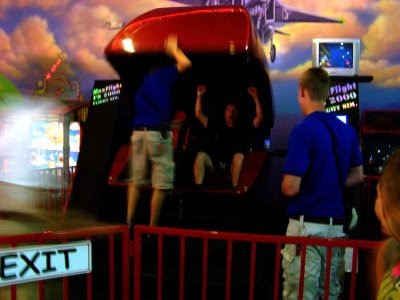 One of the attendants looked at me and stated, matter of factly:

"I'm sorry, sir. But because of your weight and the fact there is only one of you in the simulator, it won't function properly. You got stuck."

I'd made enough of a spectacle. I detached my restraints and walked out of the pod gracefully and with what little dignity I still had after my display ... which wasn't much. I had a grin as wide as an elephant as I departed.

"One of the attendants came up to me while you were stuck inside and asked me how old you were," Wife of Rupe confessed to me when I was free of the simulator.

"What does that have to do with anything?!?" I asked.