I was dragged, kicking and screaming, to baseball tryouts as a kid by my father one sunny, Saturday afternoon. I didn’t want to go, I couldn’t be made to go and I let my father know this through tears and a tantrum or two ... unconvincingly of course.

“You are going to try out and you are going to like it,” I remember my father saying. (In all actuality, I’m not so certain these were the words he emphatically stated. But through my tears and panic and fear of being made a fool of on the tryout field, this is what I remember.)

My father, you see, was a wise man. At least, in retrospect he was. He was teaching me a life lesson, but I didn’t realize it at the time. I don’t think he realized it, either.

Thankfully, the experience didn’t damage me.

Matter of fact, it was the beginning of a life-long love affair I was to have with one of the greatest games on Earth: Baseball.

Without my father forcing me to tryout for little league, I never would have been subject to the finer points of the game. I wouldn’t have learned the patience I now have. I never would have seen the acrobatics of Garvey, Russell, Lopes and Cey. I probably wouldn’t have enjoyed the thrill of Manny Mota coming out to pinch hit and save the day. No Fernando. No Reuss. No Howe, Scioscia or Gibson. No Piazza. No Mondesi. I never would have experienced the sounds Helen Dell coaxed out of the stadium organ. I wouldn’t have such fond memories of Vin Scully deftly describing the action on the field and analyzing it afterward. I would have far, far fewer smiles courtesy of Nancy Bea Hefley and her sly renditions between innings at Dodger Stadium.

You see, it’s not old school ... it’s not The School Of Rock or anything like that. It’s the School Of Tradition.

The game of baseball wouldn’t be as sweet without these integral people.

I remember being introduced to professional baseball in the ‘70's with numerous trips to Chavez Ravine, home of the Los Angeles Dodgers. I don’t know when it was I became enamored with the organ playing of Helen Dell, but I figure it was sometime in the late ‘70's.

I thrilled to the ever rising “dunt-dunt-dunt, dunt-dunt-dunt, dunt-dunt-dunt” crowd pleaser that called to all of us in the stands, demanding we clap thunderously for our team. I fondly recall her seventh inning stretch on the organ, beautiful music coming out the speakers all over the stadium, beckoning us to shout out our best “Take Me Out To The Ballgame”. The between innings change of teams was made all the quicker with her spunky tunes and abbreviated quips. 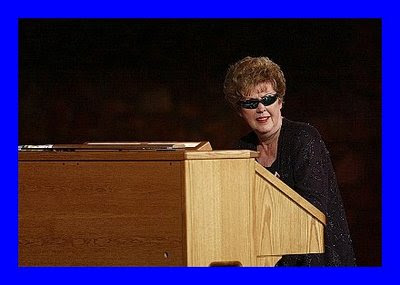 And then, the ‘80's appeared and Helen was replaced by Nancy Bea Hefley. The transition was seamless. Nancy continued Helen’s tradition and more so. To this day, Nancy’s organ still accompanies the crowd’s “... buy me some peanuts and Cracker Jack!”. More recently, her “Saturday In The Park” by Chicago graced the confines of the stadium as the Dodgers downed the Chicago Cubs in a three game sweep. It’s always been a pleasure to hear what she was playing. She usually peppered her tunes with humor - a “Three Blind Mice” when an ump made a questionable call, for example. I even remember her chasing Giants pitchers off the mound to "Do You Know the Way to San Jose?" Over the years, Nancy’s playful jibes have been grossly curtailed, but she’s still there, every home game, entertaining the crowd and filling our ears with gaiety that can only be found when you’re present at the ballpark.

Then, there’s Vin Scully. Vinny is a personal hero of mine. He tells it like it is. He gives commentary like no other baseball announcer I’ve ever heard. He is the voice of the Dodgers and a Dodger institution in and of himself. 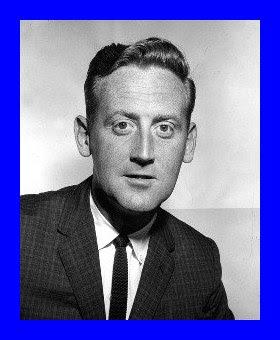 I remember as if it were yesterday Game One of the ‘88 World Series, Dodgers and the A’s. In the bottom of the ninth inning, pinch-hitter Mike Davis had been awarded first base on a two-out walk and Vinny said: “... and look who's coming up ... you talk about a roll of the dice ... this is it.” Kirk Gibson had come out of the dugout to bat. Gibby’s walk out to the plate to pinch hit was made all the more magic with Vinny’s commentary.

Later, with two strikes on him, Gibson hit the ball and painfully gimped to first base, the ball going foul. Vinny proclaimed of Gibson “... it had to be an effort to run that far.”

Vinny had always believed - and still believes to this day - the crowd tells the story at the ballpark. Vinny didn’t speak for more than a minute before finally announcing “In a year that has been so improbable, the impossible has happened.”

That’s pure, classic Vin Scully announcing right there. And it still sends chills down my spine. To this very day, I still get a thrill hearing Vin call the play-by-play.

And he’s still doing it. Almost 60 years behind the microphone and he’s still plugging away jauntily. The youngest broadcaster ever to announce a World Series game (still a record today), Vinny is a national treasure.

And I’m glad to have had - and continue to have - the opportunity to listen to him during Dodger broadcasts. I wouldn’t have it any other way.

It's a ritual of mine: if there’s a Dodger telecast on the tube not being broadcast on the local channel where Vinny’s calling the shots, I will mute the television audio, drag in the portable clock radio and tune into Vinny on the a.m. channel rather than listen to some Bozo call the action. That’s just the way it is. Anything else is substandard as far as I’m concerned.

These are some of my baseball heroes. These are a few of the memories I hold dear. These people are tradition to me.

So ... it’s was a pleasure, a mighty fine pleasure, to hear Nancy plinking out a tune in the background and Vinny calling that final out in the Cubs loss Saturday evening by the Dodgers to take a step closer to yet another World Series celebration. If it happens, Nancy and Vin will be right there with me.

Here’s a tip of my hat to a few of my heroes: Helen and Nancy and Vinny.